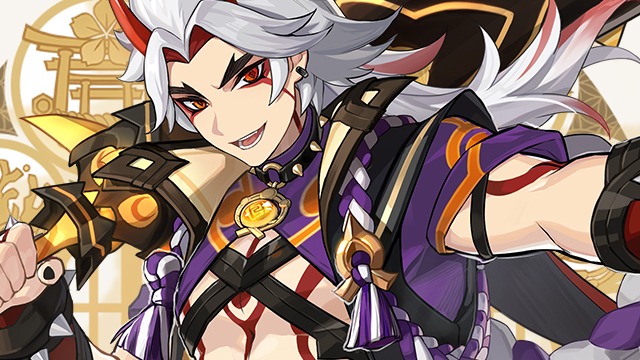 miHoYo revealed that new Geo character who will appear in Genshin Impact will be Arataki Itto,. He is the head of the Arataki Gang in Inazuma. In addition, the developer shared a piece of artwork that displays the design of this character in full.

Arataki Itto is seen wielding a club in his promotional image. The character design also features horns and what appears to be red tattoos on his face, body, and arms. The iconography of the oni is also depicted on his belt. However, while this key artwork and what aspect Arataki Itto will represent in Genshin Impact appeared, miHoYo didn’t disclose any further information. That includes the Japanese and English voice actor for the character.

You can take a look at the artwork for Arataki Itto below.

"Hello, I'm the deputy of the Arataki Gang. If you come across any inappropriate behavior on the part of our boss, Arataki Itto, please contact me immediately. " — Kuki Shinobu

Arataki Itto was a character that first appeared as part of a series of leaks. However, this is the first time miHoYo shared his face. He will arrive in a future update. That said, there is currently no word as to when this character could potentially appear via a limited time banner.

The next Genshin Impact version update is scheduled to arrive on October 13, 2021. This will allow players to purchase items that were exclusively used through events. Additionally, players will have another opportunity to obtain Childe.

Genshin Impact is available on PlayStation 4, PlayStation 5, PC, and Android and iOS. A Nintendo Switch version is in development.