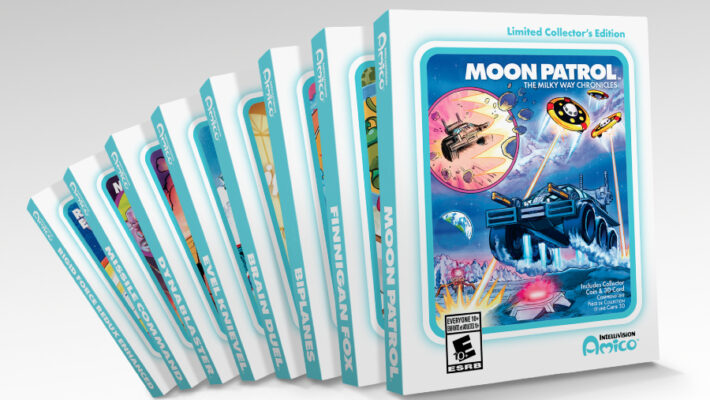 Intellivision Amico physical boxed collector’s editions are available and includes a total of up to eight games. The collection features 3D lenticular cards, exclusive metal coins, and an RFID game card tied to an NFT. While Intellivision didn’t release the console itself yet, you can purchase a four-pack or eight-pack bundle right now. The 4-pack will cost $79.99, while the complete 8-pack will cost $149.99.

The game cards resemble original Intellivision cartridges. Though marketed as a physical edition, the cards themselves do not actually hold the game data. Instead, the unreleased Intellivision Amico console will read each one’s RFID chip and unlock the ability to download the game. Therefore, the console will require users to have an internet connection to initially download the games.

Below is a list of all eight games featured in the physical edition eight-pack:

The two four-packs divide the list up. One includes Biplanes, Brain Duel, Finnigan Fox, and Moon Patrol. The other has Dynablaster, Evel Knievel, Missile Command, and Rigid Force Redux Enhanced.

As Intellivision CEO Tommy Tallarico noted in the official reveal, only the first 50,000 copies will feature the “limited edition” label. Users can track ownership of the game through an NFT registered through the Amico console. Owners can also transfer ownership of the digital game to other consoles through the blockchain.

You can check out the official Intellivision Amico physical edition reveal video below:

The Intellivision Amico was originally going to release on October 10, 2021. However, Intellivision delayed the console several times over the course of nearly two years. Most recently, it delayed the console from a Fall 2021 release window to some time in late 2021 due to component supply constraints. Once it launches, the console will include six games immediately available to play, including remakes of Astrosmash and Shark! Shark!