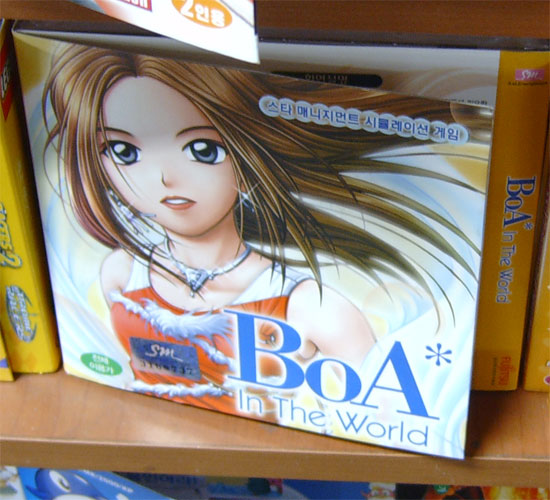 In my eyes, Rain’s PSP game looks unappealing even though Inis has a hand in the project. To be fair, I openly admit I’m not a megafan curious about Rain’s favorite food. I do, occasionally, listen to BoA and I discovered her PC game while wandering in Youngsan.

I didn’t buy BoA’s game either, but it sounds infinitely more interesting. BoA: In the World has players raise a child version of the superstar and unless the box art is deceiving she’s a cartoon in the game. I suppose this was an economic decision because paying an adult BoA to do motion capture would shoot the budget for the title through the roof. My initial impression from glancing at the game is, it sounds a little like [email protected]: BoA edition. It was tempting, but I passed.

Instead I tracked down the Korean version of Lumines II and asked if it contained any BoA songs. I was pretty sure it wouldn’t, especially after hearing how her songs would be removed from the E3 build I played, but I wanted to make sure I wasn’t missing out! I wasn’t. There is no BoA in Lumines II except in a lost concept build I played with another awesome song from Mondo Grosso.