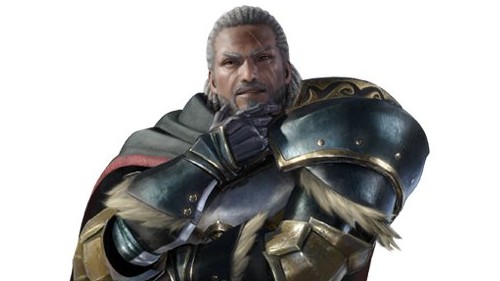 First, here’s a closer look at Master Arlow in his full armor. He isn’t wielding his gunlance in the official art.

This is Elgado Outpost's hunting tactics instructor and Arena quest handler, Master Arlow. Fiorayne and her sister Rondine have also trained under his guidance. A master of the Gunlance, he's researching ways to improve Hail Cutter's cooldown effect.

The Monster Hunter Rise Sunbreak Arena quest handler might sound familiar. Keith Silverstein is the English actor behind him, and he’s appeared in a number of major games and anime series lately. For example, he plays Zhongli in Genshin Impact and Masayoshi Shido in Persona 5. He showed up in Beastars as Goushin, BNA as Jem, Dorohedoro as En, and The Way of the Househusband as Nagai.

Monster Hunter Rise is available for the Nintendo Switch and PC, and the Sunbreak expansion will arrive on June 30, 2022.