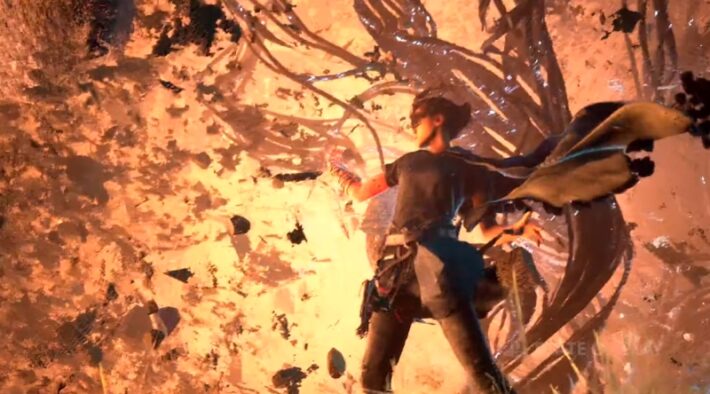 Sony’s March 2022 State of Play broadcast brought audiences a new look at Forspoken gameplay. The title was recently delayed to an October 11, 2022 release date. The delay, which was announced previously by developer Luminous Productions. This pushed the game back from a previous May 24, 2022 date.

Check out the new “Worlds Collide” trailer below.

The Forspoken gameplay trailer shows off protagonist Frey unleashing flashy magical attacks and traversing a large open-world environment. Her powers enable her to do things like surf across the surface of a lake riding an icy board and set the environment ablaze with a lava eruption. Another attack appears to convert the surrounding area into conductive glass via a lightning bolt.

The game’s story follows Frey Holland as she’s torn from her life in modern-day New York city and deposited in Athia, a world of magic and danger. (Forspoken was originally known as “Project Athia”, and content from what would become the game appeared in tech demos for the PS5 hardware.) There she’s asked to confront enemies The trailer also promoted pre-order bonuses for PS5 customers. The items are all PlayStation-themed cosmetic accoutrement,  including the “No Limits” cloak decorated with PlayStation button iconography, a “Symbol Combo” necklace, and “Trigger Happy” necklace. A crafting starter kit is also included in the bonus.

Forspoken will arrive on PS5 and PC. The release date adjustment to October 11, 2022 also affects the timeline for planned DLC pack “In Tanta We Trust”, but a new date for the pack was not yet announced.