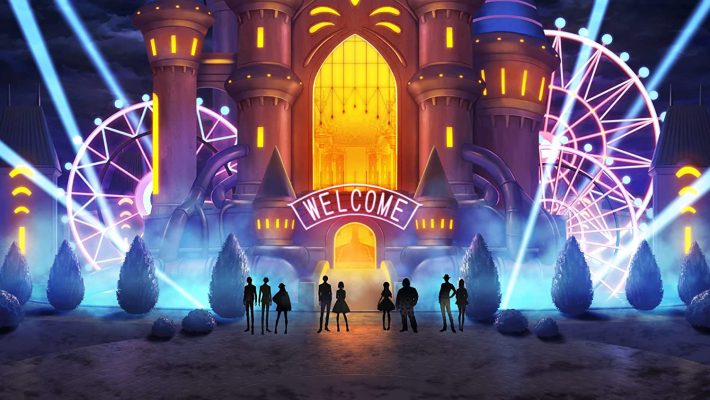 Ever since Danganronpa took the world by storm, we’ve seen waves of “death game” titles. You know the type. A person is trapped in a situation. They need to survive. However, their success means others could be doomed. Izanagi Games is about to have three games in its catalog. All three fit in the genre. However, after playing through the Switch demo of Yurukill: The Calumination Games released on the Japanese eShop, it offers an extremely strong start.

When you begin the Yurukill Switch demo, it presents a player with two options. One takes you through the main story, while the other is a shoot’em up focused score attack mode. The campaign features three difficulty levels, which apply to the shoot’em up portions, and the ability to save. It kicks things off right from the beginning. After the system “tests” the prisoner with an introduction to the auto-scrolling shooter, we meet Sengoku Shunju. He’s serving a 999 year sentence for arson, which led to mass murder, after being framed. He’s served 10 years so far. He wakes up in a cell on a boat, completely in the dark about where he is and what’s going on. Turns out, he’s not the only one. Five other people are also there as Prisoners. They’ll compete in the Yurukill games for a chance to get their freedom. As he’s filling out his will to compete, an unknown person in the cell next to him passes a note over confessing to the crime he’s doing time for.

From there, the situation gets even more compelling. These Prisoner groups are competing for their freedom. The group behind Yurukill will get real (or fabricated) evidence for a new trial. Each one is working with an Executioner. Sengoku’s is a frosty teenager named Rina. She is there to essentially work with him and watch him, and she also has the ability to kill him at any time. Every everyone’s “sins” are revealed, they learn only one of the five groups will actually get to go free. The set up has quite a bit of potential. Right away, folks are encouraged to root for Sengoku and there’s a sense of curiosity about who to trust.

From there, Yurukill essentially feels like a blend of multiple genres. During the story segments, players can choose Sengoku’s responses to situations and when talking with people like Rina. In some situations, it is a very typical “exhaust all options” scenario. Though when investigating an area, you might only get one choice. In the Switch demo for Yurukill, Sengoku and Rina’s first stop is the Fire House. As the name suggests, it is an attraction that is on fire. There are three groups of rooms. In each one, a robot acts as a gatekeeper. You can’t pass into the next block unless you fulfill the request. So for the first one, the robot wants to draw in a picture diary. That means getting crayons and the book. A person needs to solve puzzles to unlock each one. For example, one involves simple addition, while the other is a matching game. The initial area’s requests aren’t too taxing, but along the way it builds up the narrative, reveals details about Sengoku and Rina’s past, and builds up Maji-Kill Time.

While the two primary types of gameplay are adventure game-like explorations and shoot’em up, there is a portion that puts a player “on trial.” Maji-Kill Time comes up when the Executioner is ready to press the kill button to end their Prisoner. When this happens, you need to respond to four questions which one of four responses each time. Your choices will increase the Executioner’s Urge to Kill. If it passes 99%, you die. In the midst of the Fire House attraction, a secret about Rina’s past comes out and players need to navigate their first Maji-Kill with Sengoku. While it remains to be seen how others will go, there are responses in the initial round that seem plausible enough to be “right,” but could also still be “wrong.” It seems like it could be an effective means to amplify tension. (Or, at the very least, to encourage frequent saves in addition to the auto-save functionaility.)

The Switch demo for Yurukill: The Calumination Games makes it seem like Izanagi Games is putting together a lot of intriguing parts in a way that could work well. There’s a good flow between the segment. The premise is promising. It also seems like it will give people who aren’t as familiar with shoot’em ups a chance to still enjoy the adventure elements. While there is still some time before it all comes together, it seems like it could be a unique installment in a gradually growing genre.

Yurukill: The Calumniation Games will come to the Nintendo Switch, PlayStation 4, and PlayStation 5 on May 25, 2022 in Japan. It will come to North America on July 5, 2022 and Europe on July 8, 2022. A demo is available on the eShop that offers samples of the story and score attack modes.