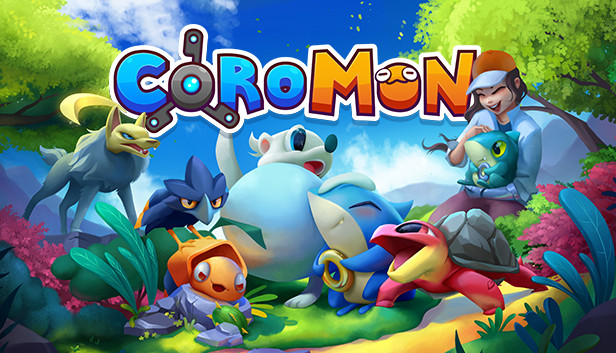 As you can expect from its name, Coromon is TRAGsoft’s take on the Pokemon formula. You’re heading out into a world to catalog its creatures and pit them against each other. (Perhaps in mortal combat, if you choose settings that establish a Nuzlocke-like run!) Like many games that take on this challenge, it tries to establish itself and be unique. While it does succeed at it sometimes, it also means that it takes a little too much time to get things done.

Coromon begins with quite a change. You aren’t a child! You’re a young adult starting a new job with the Lux Solis organization. You’ll be a researcher. Which means essentially going around the world like a Pokemon trainer would, collecting Coromon to help further the company’s research. In particular, you’re also part of a Titan Taskforce. Your goal is to visit the locations where six Titan-class Pokemon live and learn about their abilities. This means traveling the world, exploring, and fighting both wild and tamed creatures.

Coromon battles aren’t all that different from ones you face in Pokemon. Each monster is tied to one type. Its damage-dealing moves are as well. You can carry six with you. Each possesses up to four abilities in its moveset. Battles are turn-based. You can catch weakened wild creatures with Spinners. There are also certain Spinners with special properties. For example, some are more effective against certain types! There are also “shinies” of sorts, except here they are called Potent and Perfect. Not only are the colors different, but Potent and Perfect ones have better stats.

One difference is that moves require SP, rather than PP, to use. Each one requires a certain amount. However, this can be a bit frustrating. In practice, this can mean needing to rest during a battle due to running out of SP. This is due to SP carrying over between battles. But even in a single fight, you can find your character needing to rest if you’re facing multiple wild creatures or fighting a fellow researcher. As resting only restores half of your character’s gauge and leaves them prone for a turn, it can feel like it needlessly imposes added difficulty or artificially extends the length of some battles. Considering wild encounters happen very frequently, it can wear you down.

As can the length of Coromon battles due to features it doesn’t have that Pokemon does. To start, you might face more than one opponent! If that happens, the two opponents fight against your one character. You also can’t turn off attack animations. It artificially inflates the amount of time it takes to get things done. Which, considering the number of trainers in areas and grassy areas, means you’ll be doing a lot of fighting. That’s a mixed blessing, though! The form of experience share here, from what I’ve seen, is a Lazy Orb one character can equip. Since you’ll want to be at least three levels higher than opponents, you need that extra EXP.

When you aren’t fighting, you’ll also be solving puzzles. Which isn’t technically a bad thing. Some are novel. But there are a lot of situations in which you can’t just go from point A to point B, because you’ll need to solve a puzzle, play the Coromon equivalent of Flappy Bird or maybe take part in a fetch quest. Though fortunately, Flappy Swurmy ended up being removed as a campaign requirement as of the 1.0.18 patch, which means someone doesn’t need to be good enough to get a score of 50 keep making progress. (Hey, that’s me!) It’s just a lot, and it would be nice to dial that back a bit for the sake of respecting the player’s time.

There are also situations in which Coromon doesn’t do what Pokemon does. For example, there are fewer creatures out there to collect. The original Pokemon offered 151. Excluding Titans, there are about 114 to see. Since pretty much every one I’ve seen had at least one evolution, it means there is a little less variety than you might expect. This isn’t to say it is disappointing! The character designs are great. But it does mean a lack of diversity. Especially since some Coromon are generally better than others. For example, the normal-type Silquill and its two evolutions won’t be as generally effective as the other normal-type Patterbit and its two evolutions. Since there also isn’t breeding or a lot of options, it can come down to identifying which one of each type you consider “best” and sticking with it and its evolutions for the whole game. (Patterbit. Patterbit and its evolutions count as the best.)

The fact that each Coromon only belongs to a single type is another element that can affect gameplay. Normal types become a solid choice, because they are only weak to poison attacks and resist ghost-type attacks. Electric and Ghost types are great too. Electric types resist electric and water attacks, but are weak to cut and sand attacks. Ghost types resist cut and normal attacks, but take more damage from ghost and magic type attacks. An ice type takes less damage from air, ice, poison, and water attacks and is only susceptible to fire and heavy attacks. Meanwhile, a water type has three weaknesses (electric, foul, and ice) and fire types don’t have any weather condition that amplifies their abilities. I ended up relying on my Bittybolt, Buzzlet, Cubzero, Lunarpup, Patterbit, and Serpike and their evolutions pretty much the entire time.

I know a lot of this has been nitpicking Coromon a bit and pointing out some issues, but it has some good ideas and things Pokemon should adopt too! Like Pokemon Legends: Arceus, you can adjust your characters’ movesets when they learn new attacks. That’s very helpful! Fast traveling is available once you reach the second fast-travel point and complete the quest to activate it. Which is also handy. It means you don’t need to worry about HMs. In general, that isn’t an issue. Your gauntlet will get abilities that let you perform actions and solve puzzles. And sometimes an item you can wear will offer a bonus, like a Worker Helmet with a lamp on it to brighten up the Thunderous Cave. Each creature’s potential grows as you fight, which means when it “levels up” via fighting, you can assign three points to stats in any way you like. Not to mention the “shiny” status is typed to the Potential Value and can determine a monster’s strength. Other niceties include an easy to access and read quest log, a milestone system that rewards you with items for doing things you’d normally do like battle or catch, and customizable difficulty.

Coromon is a game with a lot of promise that builds on the Pokemon formula. Is it perfect? Not quite yet. I’d say the balance is slightly off in many ways. But it is still a lot of fun. It also feels like a solid first step. I’d love to see a sequel that incorporates new types, dual types, and adds more creatures.

Coromon is available for PCs. It will also come to the Nintendo Switch and mobile devices.

Coromon is a modern take on the classic monster-taming genre. Tame Coromon and explore a vast world filled with thrilling turn-based battles, brain-twisting puzzles, and a mysterious threat to the world awaiting defeat. Nobody said being a Battle Researcher was easy!
7

Coromon is a game with a lot of promise that builds on the Pokemon formula. Is it perfect? Not quite yet. I’d say the balance is slightly off in many ways. But it is still a lot of fun.