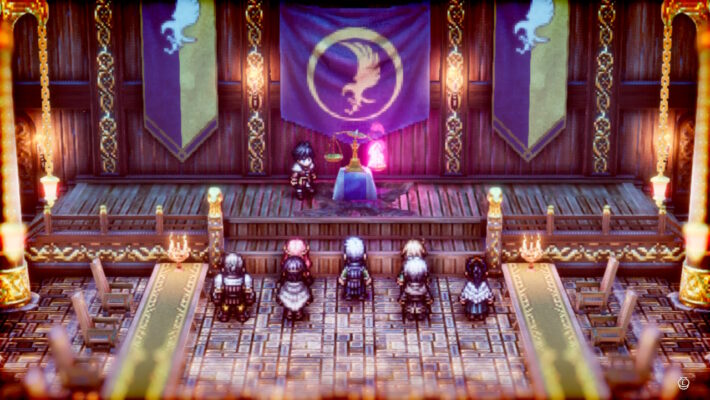 Triangle Strategy, the second new game showcasing Square Enix’s “HD-2D” tech, brings the distinctive look to a new sort of game. The tactical role-playing game renaissance has brought a lot of new and returning players to the subgenre! So it’s good timing for Triangle Strategy‘s release. Does it capitalize on the opportunity?

In Triangle Strategy, you control Serenoa, heir of House Wolffort and one of the military leaders of his nation. You’re pinned between two powers, each controlling a vital resource. Inevitably, of course, you’re thrust into conflict! How things go from there depends on periodic voting sequences. The “scales of conviction,” a central piece of the game’s marketing, let Serenoa’s companions vote about which path to take. The gameplay, then, is in convincing your friends to make the decision you want, as well as traditional tactical combat. 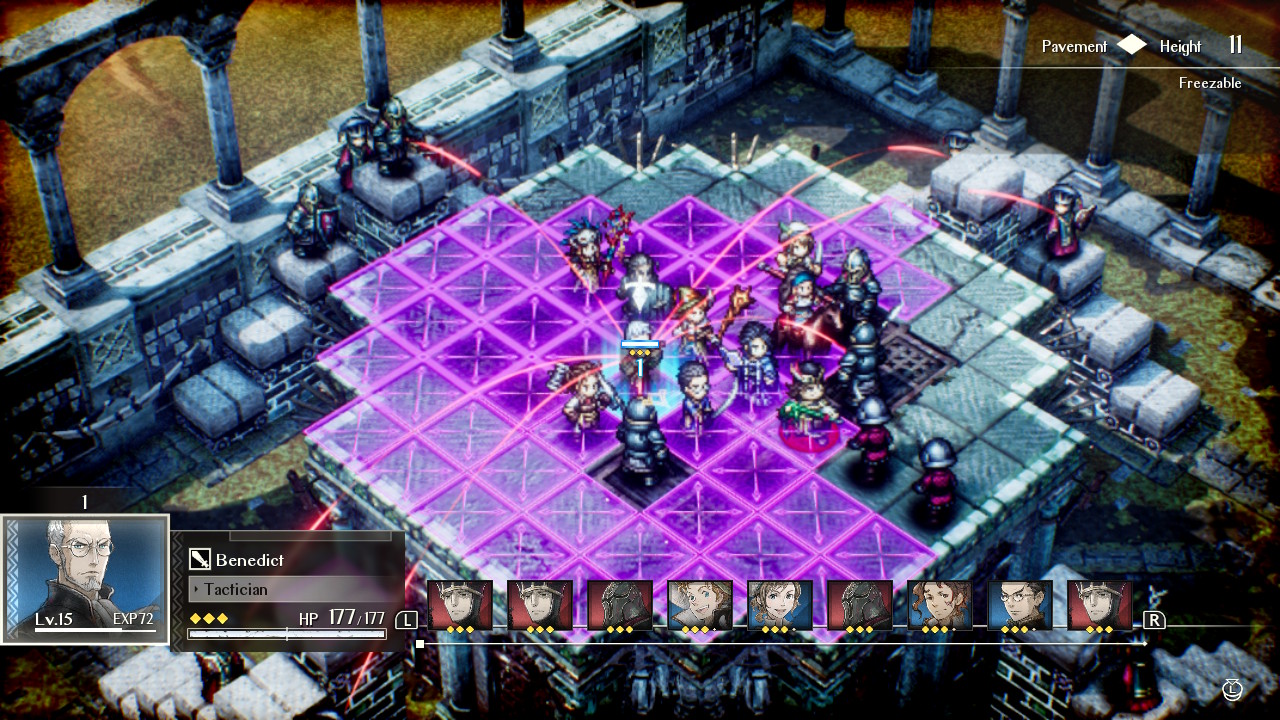 The playable units of Triangle Strategy all perform distinct roles. Some players may miss the custom unit crafting of games like Final Fantasy Tactics! But retaining strict classes means each feels very different. Precisely one unit can fly for most of the game. Exactly one can attack twice. It doesn’t quite reach the puzzle-like nature of Into the Breach, but it’s a step in that direction. You can augment units with stat upgrades and equippable accessories, but these don’t fundamentally change how they function.

While you can’t break a map with a devious character build, you can occasionally do so with knowledge of the game’s tactics. We won’t spoil any more than we must! But we found that we could render one near-hopeless map trivial if we flew our flying archer up to a roof. No one could reach her! And since the game doesn’t feature “permadeath” or any penalties for falling in combat, she could sit up there and pick off foes by herself for 25 turns. 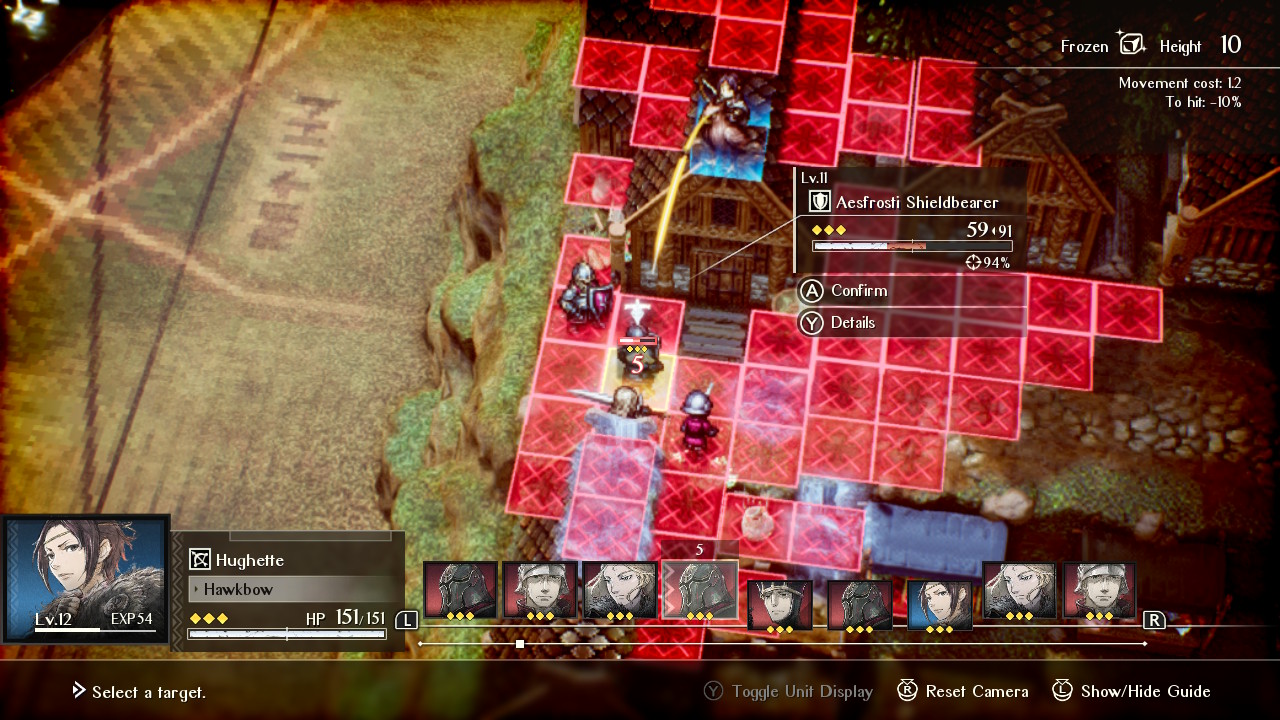 Triangle Strategy is very proud of its narrative. There’s some merit to it — it does craft some interesting dilemmas — but you definitely need to prepare yourself for a lot of text. All the exposition makes for a very slow start, one a lot of players noticed in the pre-release Prologue Demo. This does get better with time, and those looking for more battling between narrative segments can take advantage of the legitimately interesting barkeep maps.

If you’re looking to limit your reading time, you can stick to the main story beats. The character stories and green side scenes are interesting if you have the temperament to enjoy them! But skipping all of the story is going to detract from enjoying the decisions you make, so at least pay attention to those.

In your first playthrough, you’ll see a message when you earn points toward the game’s three narrative-related stats, but it obscures which you’re boosting. (You can see more information in a New Game+ campaign.) We’d recommend playing the first just trusting your own judgment, as all the paths have something interesting to see. Aiming for the “true ending” takes away from making decisions and seeing their consequences, something this game does better than a lot in its genre. 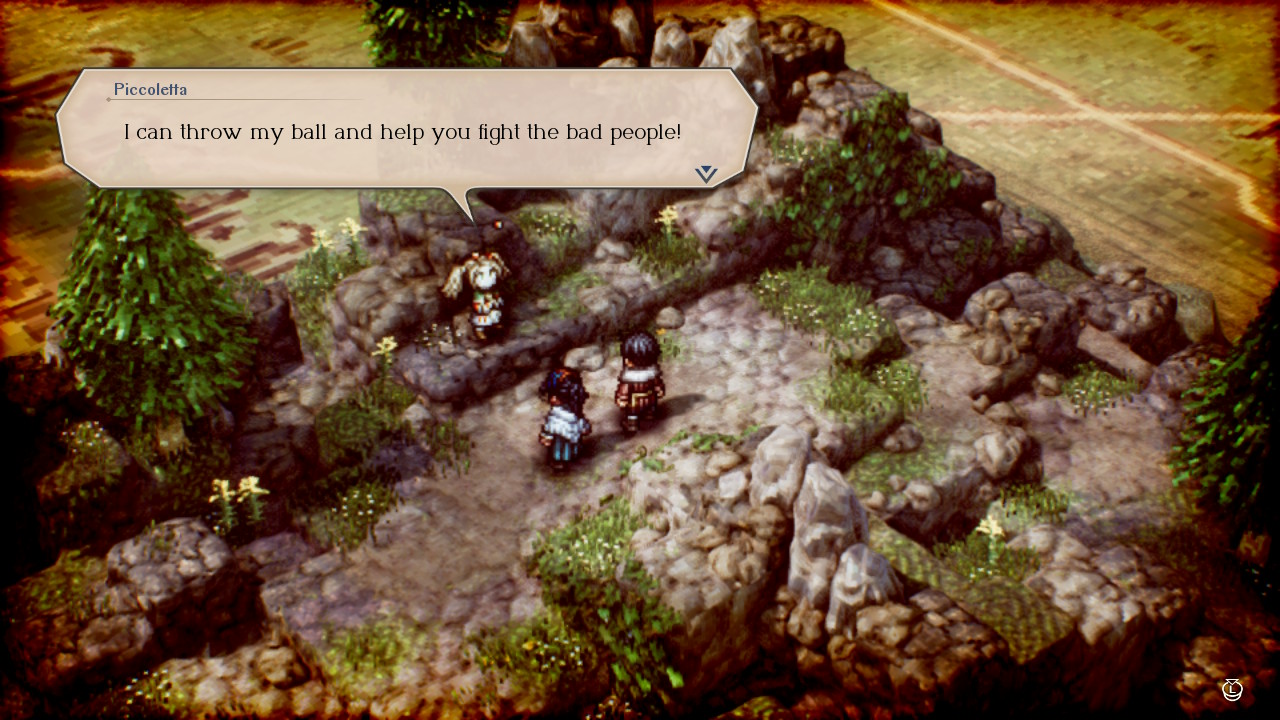 A big selling point of Triangle Strategy is its “HD-2D” aesthetic. The look, which started with Octopath Traveler, takes pixel art and coats it with all sorts of filters and effects. It’s handled fairly nicely here, but the subgenre does make things more difficult. Camera control’s sort of important in a tactics game with elevation and 3D presentation, as you regularly need to see around things. (Also, hey, people have preferences about height and default positioning!) So you definitely see the seams more often in Triangle than Octopath.

The game also seems to struggle to run at times on the Switch. As a result, the dev team appears to have dialed back the resolution, making for a blurrier experience even in handheld mode. We started to ignore it after a while! It’s tolerable! But if Triangle Strategy makes its way to other platforms like Octopath before it, it might see a significant visual upgrade.

You’ll get the most out of Triangle Strategy if you bring a little patience to the proceedings. It starts slow. It throws a lot of story at you. The most interesting tactical powers show up in later levels. And you only see some of its compelling narrative beats in a second or third play. It’s destined to be a game you either shrug off in the early hours or add to your list of favorites. 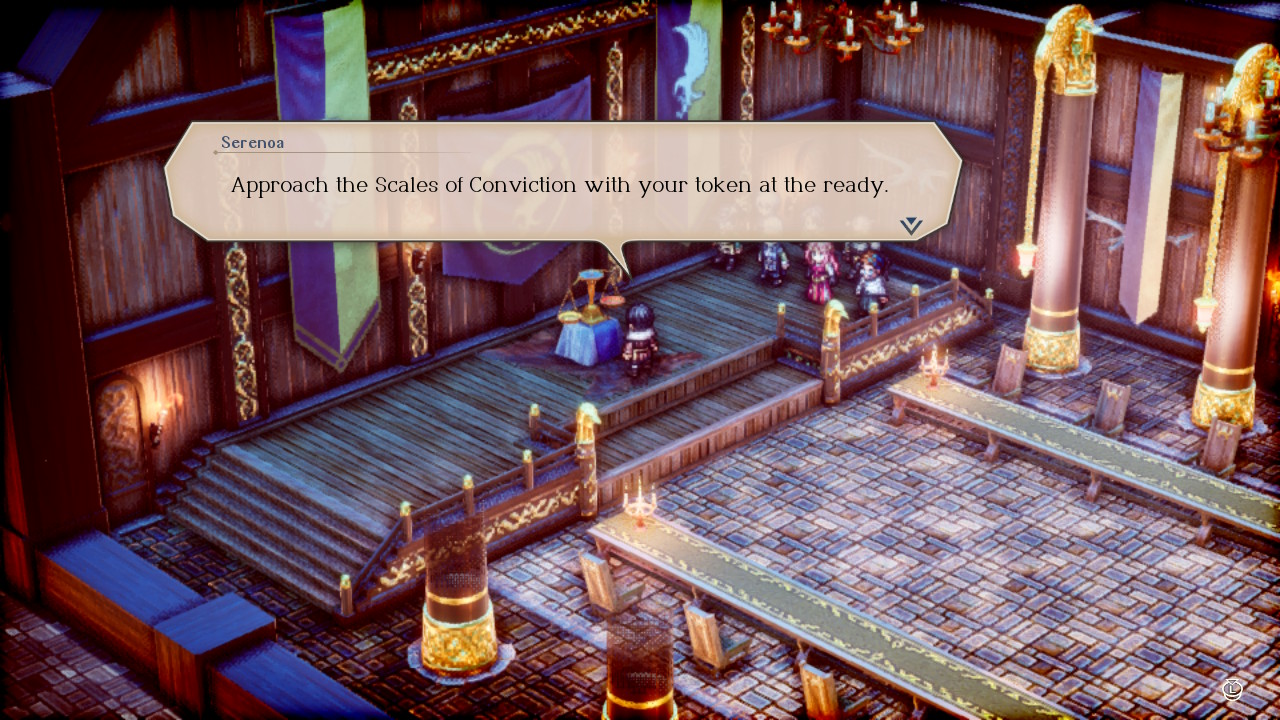 Triangle Strategy was developed by Artdink and Square Enix, and published in the West by Nintendo. It’s available now on Switch.

Command a group of units as Serenoa, heir of House Wolffort, in a tangled plot where key choices you make will influence the story. The stunning HD-2D visual style blends 3D environments and modern effects with pixel-art characters and details.
8

You'll get the most out of Triangle Strategy if you bring a little patience to the proceedings. It starts slow. It throws a lot of story at you. The most interesting tactical powers show up in later levels. And you only see some of its compelling narrative beats in a second or third play. It's destined to be a game you either shrug off in the early hours or add to your list of favorites.