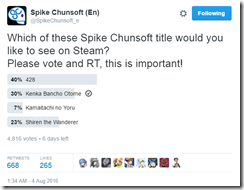 People following Spike Chunsoft on Twitter were in for a bit of a surprise on August 4, 2016. The company’s English account put up a poll asking about some of its Japanese language games. It asked people to vote for the game they’d most like to see ported to PCs and released on Steam, listing 428, Kamaitachi no Yoru, Kenka Bancho Otome, and Shiren the Wanderer as options.

Of the four games in Spike Chunsoft’s Twitter poll, three are visual novels. 428 is a visual novel that appeared on the Nintendo Wii, PlayStation 3, and PlayStation Portable, as well as Android and iOS devices. It follows a strange kidnapping event happening in Shibuya and the five people who come together to solve the mystery. Kamaitachi no Yoru was released on the Super Nintendo, PlayStation, Game Boy Advance, and PC, though people outside of Japan may know it as the Apple iOS and Android game Banshee’s Last Cry. A young man named Toru and his girlfriend, Mari, find themselves trying to help solve a murder that took place when they were visiting a ski lodge on their vacation. Kenka Bancho Otome is a PlayStation Vita game where a young woman goes to an all-boys school for delinquents in place of her long lost twin brother, pretending to be him. Naturally, she can end up falling in love with one of her bad boy classmates.

Shiren the Wanderer, meanwhile, is a roguelike RPG. Spike Chunsoft’s Twitter poll doesn’t specify which installment it would consider releasing on Steam, but Shiren the Wanderer: The Tower of Fortune and the Dice of Fate is the most recent entry in the series. It came to the PlayStation Vita in North America on July 26, 2016.

As of 10:20am CT on August 4, 2016, the game getting the most votes in Spike Chunsoft’s Twitter poll was 428. It had 40% worth of support from the over 4,900 people who had responded. Kenka Bancho Otome was in second, with 30%, followed by Shiren the Wanderer and Kamaitachi no Yoru. The poll will be available on Twitter for six more days.