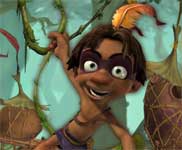 He isn’t the first video game character to get a computer animated series and Tak certainly won’t be the last. However, there is something unusual about Tak’s silver screen debut. Like why? I can think of plenty of other games that sold more copies than the Tak trilogy and there are many more iconic video game characters that don’t have their own shows. Kids must love Tak or at least Nickelodeon thinks they do because they have been investing in the Tak series of videogames from day one. That’s right Nickelodeon made the games first and went back to create a show, which premieres this fall. Creative, but I highly doubt Tak is going to be a mega hit like Spongebob.