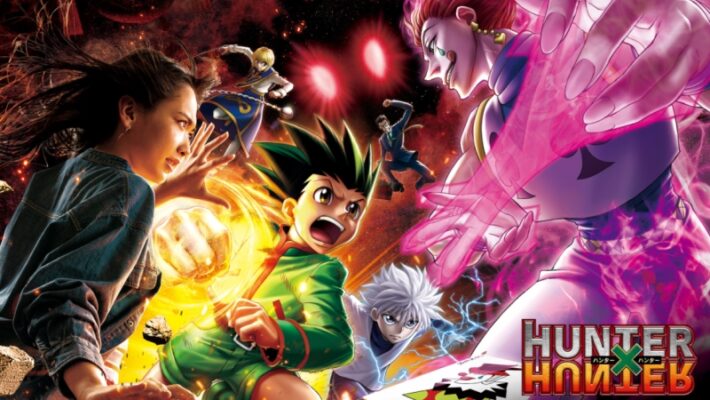 Universal Studios Japan unveiled its next collaboration installment. As teased in November 2021, the new USJ attraction is based on popular manga and anime series Hunter x Hunter. Its formal title is Hunter x Hunter The Real 4D [Thanks, Famitsu].

The announcement was also relayed, along with the attraction’s key art, via the Universal Studios Japan Twitter account.

Hunter x Hunter The Real 4D takes the form of a theater show that utilizes the “4D” style of presentation. 4D (or “4DX”) is a specially-built setup for movie theaters that combines 3D images onscreen with special sound, lighting, and special effects. Participants sit in specialized seats that can move, roll, and vibrate to enhance the impact of the images onscreen. The seats are also able to deliver practical effects like wind gusts, smoke, fog, and splashes of water.

The story features Hunter x Hunter characters Gon, Kurapika and Killua. The trio infiltrate a mafia auction at the behest of the Hunter Association. There, dangerous creatures and treasures are up for sale to the highest bidder. The mission gets complicated when their foe Hisoka appears and goes on a rampage. The three must use their Nen powers, like Gon’s Jajanken and Killua’s Speed of Lightning to stop Hisoka and the enemies that appear.

Hunter x Hunter isn’t the first entertainment property to collaborate with USJ. The park has other attractions based on Detective Conan, Demon Slayer, and Monster Hunter currently active. USJ also hosts the Super Nintendo World area, with attractions and rides based on Nintendo properties.

The Hunter x Hunter The Real 4D attraction opens at Universal Studios Japan’s Cinema 4-D Theater on March 4, 2022. It will run through August 28, 2022. The source manga is published in English by Viz Media and its anime adaptation can be streamed on Crunchyroll.