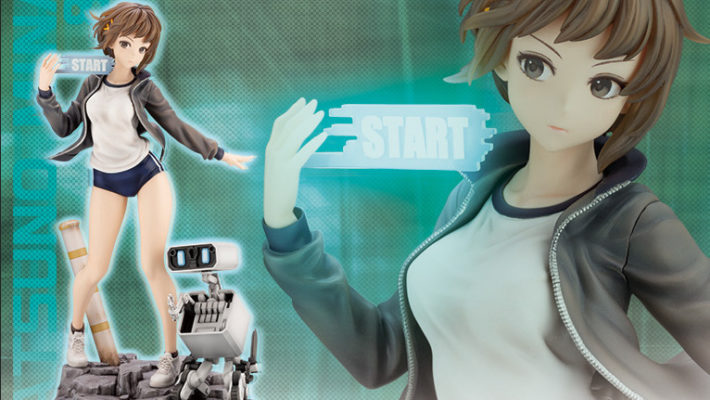 Kotobukiya has updated its online store with images of the Natsuno Minami figure. Natsuno is from the game 13 Sentinels: Aegis Rim, and this figure will be part of the Kotobukiya ARTFX J series. It is set to release at some point in July of 2021 and is available to pre-order for $142.

The Natsuno figure first appeared as an unpainted prototype at Kotobukiya’s virtual booth during Megahouse MegaHobby Expo 2020. At that point, we learned that Natsuno would be accompanied by a BJ the robot figure.

BJ the robot serves as a companion to Natsuno in 13: Sentinels: Aegis Rim and its figure can be affixed to the base or detached and displayed separately. The base itself is modeled after stone terrain and is meant to “recreate scenes in the game where [Natsuno] heads to battle.”

The Natsuno 1/8 scale figure is made of PVC, stands 250mm tall, and depicts the character in gym clothes. It will come with two hand parts that can be switched out, one of which holds a START effect. The other is empty.

13 Sentinels: Aegis Rim is available for the PlayStation 4 worldwide. Figures of other characters from the game, like Iori, are also available through a variety of companies.