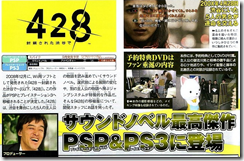 Chunsoft is porting their critically acclaimed sound novel 428: Fusasareta Shibuya de to the PlayStation 3 and PSP. In 428 players are locked in Shibuya and switch characters to solve a mystery behind a kidnapping.

Famitsu broke the news about the port, which is scheduled to come out in Japan this September. 428 was first released on the Wii in December 2008. This isn’t the first sound novel port from Chunsoft. Last year, the PlayStation 3 game Imabikisou and its creepy eye was ported to the Wii.

The most interesting detail about the port is Sega isn’t handling it. Sega published Imabikisou and the Wii version of 428 in Japan. Spike, notable for the Way of the Samurai games and handling 2K Sports titles in Japan, will publish 428 on PlayStation platforms.

Since Sega isn’t involved there’s a small very small chance 428 could get localized as a downloadable PSP or PlayStation 3 game. Capcom, UFO Interactive, and Atlus are some of the publishers that localized Spike’s games for North America. Atlus also has a relationship with Chunsoft from Shiren the Wanderer.