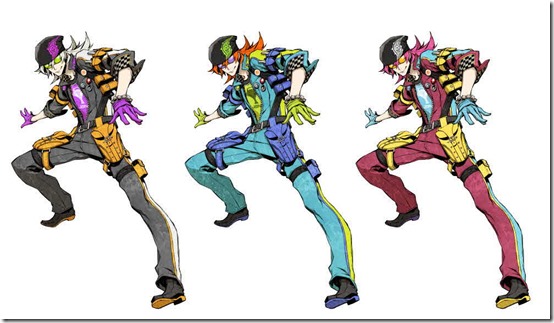 Last week, when Sega revealed it would include an art book with 7th Dragon III Code: VFD launch editions, an observant reader named InquisitiveRavenclaw noticed that the male agent had a Graffiti Soul and “JSRF” t-shirt on. (Nice catch!) Sega has since confirmed that this is a deliberate nod to Jet Set Radio Future.

Miwa Shirow, the 7th Dragon III Code: VFD character designer, is a confirmed fan of Jet Set Radio Future. The goal with the Agent class was to design a character that looked like a “street-wise youth,” especially since this class relies on various “conditions aligning in combat.” As an additional bonus, the male agent’s internal name is “Jet.”

Sega also brought up another reference to a classic game that’s present on 7th Dragon III Code: VFD’s Agent. One of the buttons on his chest is a symbol from Cyber Troopers Virtual-On Oratori Tangram, a Dreamcast and Xbox 360 3D fighting games starring giant robots.

7th Dragon III Code: VFD is coming to the Nintendo 3DS in summer 2016.