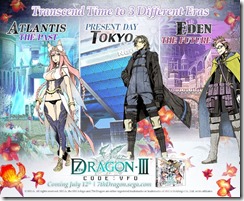 Sega has updated the release information for 7th Dragon III Code: VFD. Originally, the Nintendo 3DS game had a tentative summer 2016 launch window. Now, it has been scheduled for a July 12, 2016 release in North America.

In 7th Dragon III Code: VFD, the world is besieged by dragons. It’s up to players to create a team of characters who will take on quests from Noden Enterprises and travel through time to defeat dragons in three different time periods. Players will have eight different classes to choose from for their characters, with Agents, Banishers, Duelists, Fortuners, God-Hands, Mages, Rune-Knights, and Samurais available. There are also 32 portrait options and 40 different voice options.

When 7th Dragon III Code: VFD launches on July 12, a launch edition will be available. People who pre-order or buy a first-run copy will receive a 26 page art book with the Nintendo 3DS game.