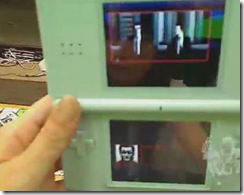 While it isn’t in stores, Grasshopper Manufacture has a build of it. They even teased fans with it during a webcast timed with the European launch of No More Heroes 2: Desperate Struggle.

The last official word on The Silver Case is it’s on hold for the Nintendo DS. Suda believes the decade old title needs a proper remake, not just a quick port, for this generation of gamers.