aka Castlevania: Dawn of Sorrow outside of Japan. 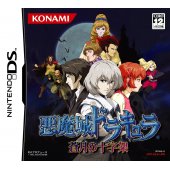 Konami’s Castlevania series may not be holding its ground in the 3D world with Lament of Innocence. Yet the series is still going strong in an unlikely place, your pocket. All of the GBA Castlevania titles were and still are stellar. The final GBA game, Aria of Sorrow tops the other three. It stars a new hero outside of the Belmont family, Soma Cruz who’s caught in Dracula’s castle far in the future. Soma has the uncanny ability to absorb the souls of his foes, a skill that will be ever useful when battling lifeless moving armor.

Castlevania: Dawn of Sorrow (note the clever use of DS in the title!) brings back the soul system introduced in Aria. You still have a chance to absorb one of three soul types with each kill. Bullet souls are your run of the mill special attacks that you can get from battling on screen fodder. The fenrir soul calls a wolf spirit in front of you to bite enemies, while the axe armor soul lets Soma throw axes in the air. All souls can be used by pressing up+Y and consume a small amount of your magic meter. The meter is long enough so Soma can summon five zombies on screen with the zombie soul. You probably don’t want to waste all of your magic on attacking, you’ll need to save some to use you enchant soul. These souls give you special abilities, like gliding or summoning a spirit outside of your body. Enchant souls are generally more useful for exploring areas or for dealing out a powerful attack. Guardian souls are the third kind of soul, which can give you bonus strength or life.

Collecting souls is a challenge, since each soul has a different rarity. It’s easy to pass through the entire game and miss souls. Add collecting weapons to the list and you’ll see there’s a lot to seek out. Each weapon in Dawn of Sorrow handles really differently instead of just having upgraded stats. A claymore feels heavy when Soma’s using it. When he swings the sword with the Y button it comes crashing down, with a slow recovery time. On the other hand when he’s using a foil Soma quickly draws it out to poke what’s in front of him. Besides gothic weaponry Soma will also pick up ranged tools like a boomerang, knuckles and a katana. Each weapon can be further upgraded with the cost of a little gold and a couple of souls. One smart addition to the game was a quick equipment change. You can outfit Soma twice in the main menu and by pressing X you can swap equipment in snap. This allows you to stab a skeleton with a spear and then immediately switch weapons to a more useful mace. The quick switch also changes Soma’s soul set up and even armor. So, if you want to have one setup for long range and another for close encounters it is easy to set up.

Since Soma has become ever more adaptable his foes are a little tougher than in Aria of Sorrow. The run of the mill supernatural villain won’t pose much threat to Soma. Although, battling Frankenstein clones and fire breathing pigs do give Soma a fair amount of experience points. It’s the bosses that can have you on edge. I’m not talking about the first huge flying armor boss that is a pushover. I’m thinking of Dimitri who steals your enchant soul attacks to use them back at you. Now you have a battle that you need to think about instead of memorizing the attack pattern dodge, attack, crouch. Then there’s the Puppetmaster who relentlessly covers the screen in dolls. This is just a distraction because he will make a special doll linked to Soma’s soul and switch the two just as he places the doll in a coffin of spikes. Ouch! Yeah, these guys have a good amount of challenge, enough where it feels rewarding when you beat a boss. There is an annoying feature when your in the midst of an epic battle between good and evil.

When you successfully knock a boss into oblivion you need to seal it by drawing a magic circle on the touch screen. This procedure interrupts gameplay because players have to whip out the stylus to draw for less than two seconds. Draw the seal the right way in the short amount of time and you’ll win the battle. Otherwise you’ll be forced to continue fighting until you dwindle the boss’s HP down so the magic seal challenge pops up again. Another use of the touch screen has players remove ice walls on the bottom screen. The screen isn’t sensitive enough so you can wipe away all the ice with a finger. More likely to have to pull out the stylus again. Not every game has to use the touch screen, Castlevania: DoS would be better off without it. Dawn of Sorrow doesn’t even need to use both screens. The top screen ends up being either a map or Soma’s status screen. Since a life and magic meter are on the main screen the only reason to look at the top one is when you’re lost.

Castlevania: Dawn of Sorrow also suffers a bit in the presentation department. The in game graphics have reused sprites from Aria of Sorrow and some jagged edge issues not seen in other 2D DS games. It’s still passable because Dawn of Sorrow has some well translated concept art. Monsters are still large and original. Where else can you find a giant skull with hands for feet? One major change is the amount of anime influence seen in the character design. Just compare the cover art between the two games. One looks distinctly gothic and one looks more fitting in the manga section.

It is clear that Dawn of Sorrow originally started out as a GBA title. It plays more like an advanced GBA game instead of a full fledged DS title. Although, not every title has to use the DS’ touch screen or microphone. Some games are just fine sticking to a classic formula and that’s what Castlevania: Dawn of Sorrow does. It’s another entertaining cousin of Symphony of the Night that is bound to keep you busy for about ten hours.

If you’ve played Aria of Sorrow or Symphony of the Night you can jump right into to "playing" the title. All of the key menus are in English, but specific item names are not. Importers might have a problem discerning what item is a potion and names of certain seals, which requires a little patience to figure out. You’ll also have to deal with not understanding the story, since it is entirely in Japanese.

+ Pros: A good balance of difficulty and some tweaking on the soul system over the GBA prequel.

– Cons: Plays too much like a Game Boy Advance "plus" title.

Overall: Castelvania: Dawn of Sorrow is a great 2D adventure game, that follows in the footsteps of Aria of Sorrow and Symphony of the Night.