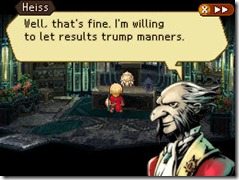 This past week, Atlus USA invited the press to a web-streamed demo of upcoming Nintendo DS RPG, Radiant Historia, where we could watch a playthrough of the opening portion of the game and chat with Atlus USA’s localization team to learn just how Radiant Historia’s time-travelling system works.

Developed internally at Atlus in Japan, Radiant Historia had quite the consortium of developers working on it. Described to us as one of Atlus’ most ambitious Nintendo DS games to date, Radiant Historia brought together select members of the Persona and Shin Megami Tensei teams, along with certain members of Tri-Ace to see it through development. Topping off the pile was Yoko Shimomura, who lent her talent to provide the game’s soundtrack.

Time-Travel Without a DeLorean:

Radiant Historia takes place in the nation of Alistel. The game starts out with its protagonist, Stocke, a member of Alistel’s intelligence agency, being sent out on a rescue mission to recover a fellow agent from enemy confines. Before he heads out, Stocke is handed a magical book called the White Chronicle that will aid him in his mission. 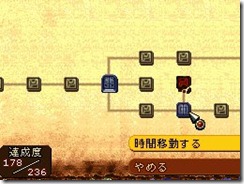 The White Chronicle is how you manage time-travel in Radiant Historia. Pictured to the right is a small part of the game’s timeline. The brown boxes represent linear events or chapters in the game. The blue boxes indicate events where you’ll be required to make a decision that will affect how you proceed. These are the points you travel back in time to. Finally, the dark brown boxes indicate a dead end or a bad end.

Radiant Historia has two main timelines, both with their own different feel with regard to the game’s story. Each of the two timelines then branches out into several smaller paths, making for a pretty large and diverse time stream. If you choose to invest the time required, it is possible to view every single path and event in the game during a single playthrough.

While Radiant Historia has multiple endings, there are two “true” endings you can reach. The first is the game’s ultimate resolution, while the other is an extended version of the same that can be unlocked by completing every event in the game.

The first thing you’ll want to know about battles in Radiant Historia is that they aren’t random. You can see enemies and choose to avoid them if you don’t want to fight. If you do want to do a little hassle-free grinding, however, the game has an “Auto Battle” option that can be turned on, which will make your characters spam their basic attack move over and over. We can’t attest to whether or not this will be effective in any way without having played the game yet, though. 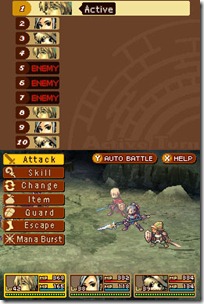 The real crux of Radiant Historia’s turn-based battle system, however, is the “Change” command. This allows you to change the order of turns, represented on the DS top screen, and decide who attacks when. The Change command applies to every single player present in the current battle — even enemies. You can swap your turns with theirs, too.

By using the Change command, you can group your party’s attacks to execute one after another, or in any other order you like. For example, you’ll want to make the first move and have your party attack one after the other if you think you could end the battle in a single round.

There is a risk to using the Change command, however. When you use the Change command on a member of your party, they begin to flash red in colour, indicating that they’ll take increased damage until their turn to attack arrives. This is one of the ways in which Radiant Historia’s battles involve a bit of a gamble. 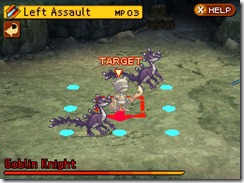 The Change system also ties in strategically to the second layer of Radiant Historia’s battles: the enemy grid. During battles, your enemies will be placed on a 3×3 grid. Enemies in the front row have increased offense, while enemies in the back row have increased defense. By using certain skills in battle, you can push or pull enemies farther or closer on the grid, depending on whether you want them to hit harder or take a beating better.

You can also stack enemies onto the same square on the grid. If you manage to pull this off, any attack you use on a single enemy on that square will hit all the rest as well. So, in conjunction with the Change command, an effective strategy would be to pile enemies onto the same square and use the Change command to have your party members attack one after the other to deal out damage in the most efficient manner.

While enemies can’t manipulate the order of turns, they can use one of their own turns to move around the 3×3 grid. Also, if you manage to stack enemies onto the same grid square, once your turn ends, they’ll be able to “unstack”  themselves without spending a turn.

During battles, your own party is limited to three members. However, during the course of Radiant Historia’s story, you’ll find up to 7 members to create your three-man party from.

Radiant Historia is due out on February 22nd on the Nintendo DS. Launch copies of the game come with a bonus soundtrack CD containing 5 piano arrangements from Yoko Shimomura’s score for the game.