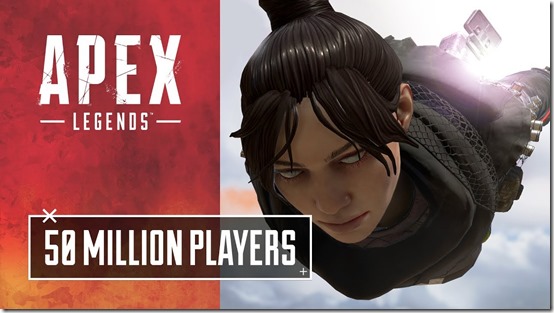 Here’s a trailer to commemorate the 50 million players:

You pinged, you slid, you got in fights with care packages. Apex Legends just hit 50 million players – check out all the amazing things that have happened in the Apex Arena, and thank you for being part of the fun!

After the game’s launch on February 4, 2019, it quickly reached the 2.5 million players milestone after one day, then 10 million players by its third day, and 25 million within its first week. While Fortnite is still the top battle royale game as far as player count goes with over 200 million registered players as of November 2018, it took over four months for it to reach the 50 million players mark, a goal that was achieved by Apex Legends in one month.

Apex Legends is available on PlayStation 4, Xbox One and PC.