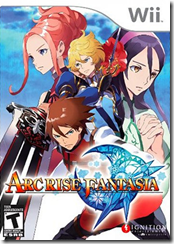 Like many Siliconera readers, I was concerned about Arc Rise Fantasia’s localization after seeing a few voice cutscenes. “The voice acting, to put it lightly, has gotten less than favorable reactions,” I said to Shane Bettenhausen, New Business Development Director at Ignition, during an E3 meeting.

“It’s a touchy subject. I would say that some of the actors are really good, some of them might not be to your liking. There were unique challenges with Arc Rise Fantasia because we came into it when it was already in progress somewhat when Ignition picked up that title,” Bettenhausen replied.

“I feel that the price point for that game, at $39.99, makes it a little more palatable for players who do not like the voices. And you can turn the voices off. I think people may be overreacting a bit to a few voice they heard. Overall, the voice acting I would say is on par, but maybe not the level of a Final Fantasy or a really high budget localization.”

I reiterated the importance of stellar localization — I mean, that’s what everyone wants — and asked if Ignition would improve the quality for future games.

“The realities of Arc Rise Fantasia are not lost on us. I feel we’re turning a new corner where our localizations are headed. With El Shaddai we’re paying very close attention, everything you’ve seen here still has Japanese voices, but it will be fully localized. The talent we have is on a level we never had before,” Bettenhausen avowed.

“We’re also working with different localization companies than we have at past.”

“Not just Entalize,” I pressed.

“We are working with very different localization companies,” assured Bettenhausen.