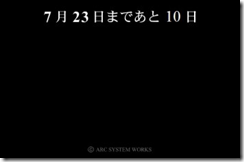 Arc System Works, the developers of BlazBlue and Guilty Gear, are counting down to an announcement. When you visit the site’s home page it fades into a teaser screen before loading the official Arc System Works site.

BlazBlue: Continuum Shift recently came out in Japan, so (fingers crossed) this is for a new fighting game or at least release dates for the downloadable characters. But, the screen could be for anything even something as anti-climatic as a web page redesign.

If Famitsu doesn’t leak it first, we’ll find out what the Yokohama based publisher is teasing on July 23.