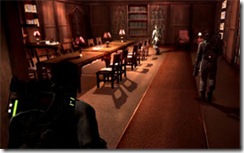 This has been a rumor for quite some time, but now it’s official. Atari scooped up Ghostbusters which was left behind after the Activision Blizzard merger. Ghostbusters will come out on nearly every system. A PlayStation 3, Xbox 360, Wii, Nintendo DS, and even a PS2 version are due out next year.

I played a Ghostbusters build on the Xbox 360 and Ghostbusters was one part proton pack FPS and one part hide and seek. I had to find rogue spirits with using a ghost radar that beeps when they get near by. Step close to ectoplasm and the radar goes nuts, but the ghosts were more often hidden in objects. The highlight of the library level was a mini-boss fight where a haunted stack of books joined together to make a giant book man thing. While Ghostbusters looked great on the Xbox 360, I think I’ll opt for a Wii version if you can point at the screen and shoot proton beams with the remote.