Eden, a land where alchemy thrives, is in danger. After experiencing an earthquake half of the floating island vanishes. Two orphans Felt and Viese are caught in the middle of the crisis while visiting Dour’s Wood. As they rush back to report the news to the Eden Temple, Felt draws the mysterious Azure Azoth from its stone prison. Felt has dreamed of this day for many years and now he his journey beyond Eden begins. 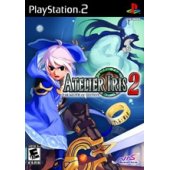 Viese and Felt are the two stars of the Azoth of Destiny, but they are separated in the first half hour of gameplay. Felt follows the will of the blade and explores Belkhyde, a world beyond the sealed gate. Meanwhile Viese stays behind in Eden and uses her alchemic talents to support Felt. While they both can use alchemy, only Viese can synthesize new items. If you want to increase your stock of healing herb or craft a new accessory, players need to switch over to Viese. Besides being the one stop item shop, Viese has her own quest in Eden. She needs to make pacts with mana spirits, collect items to help Felt and discover the mystery behind the quiet girl Iris. One thing you won’t be doing with Viese is fighting Punis (the slimes in the world of Atelier Iris). Fighting is strictly for Felt.

Belkhyde isn’t the paradise that Eden is. When Felt arrives he feels the harsh elements of the desert and gets his hands dirty with combat. Early on he meets up with Noin, an energetic hand to hand fighter who is standing up against the Empire’s expansion throughout Belkhyde. Noin saves Felt’s life after he passes out in the desert due to exhaustion. Felt follows his first friend’s path against the Imperial Army. Later on Felt will befriend the dragon-like Grey as well as the mysterious girl Fee.

Felt’s scenario is more traditional RPG fare. There is dungeon exploration, random battles and plenty of leveling up. Combat in Atelier Iris 2 is centered on the ACTB bar on the top of the screen. Your party and the enemies all have icons on the bar. Whoever reaches the right side of the bar gets to take a turn. Each party member comes with two kinds of attacks a swift charge attack and a heavy hitting break attack. The charge attack deals a fair amount of damage, but more importantly it increases the skill gauge meter. The break attack gives a little more damage and has the added bonus of delaying an opponent’s turn. If the break attack pushes an enemy’s turn into the orange bar, the monster will become dizzy. At this point any extra hits to that monster while in the dizzy state chain for extra damage. In Atelier Iris 2 there are no magic points; special moves are done using the skill gauge. When combat begins the skill meter is filled up with one level of energy. With that opening level of energy Felt can rush in to do a mana attack and increase his damage for one turn or use the mana wave and hit a small group of foes. Other skills can be used to heal like Noin’s healing wave technique. If you want to use more powerful skills you will have to charge the meter up by using the charge attack or taking blows. Most of the powerful skills require three bars of energy, but since the skill meter is shared between the party it is not too difficult to fill it up.

By exploring the world and collecting new weapons players can learn new skills. Unlike other RPGs, Atelier Iris 2 makes it easy for players to search every nook and cranny. Each dungeon has a set number of enemy encounters as indicated by a meter on the left hand side of the screen. After you fight five or so battles the meter empties out and you are free to explore the room without any interruptions. Exploring areas is crucial since you will need to collect alchemy ingredients for Viese and find hidden recipes. The downside of the dungeons is the design. Most of the environments are bare with a few jumping puzzles. The design is bare too. After three rooms you get that “have I seen this room already” feeling.

Gust has never been about emphasizing graphics. Most of their games including Atelier Iris: Eternal Mana have a minimalist approach compared to other Playstation 2 games. The game uses sprite graphics instead of 3D models, which makes the Azoth of Destiny look like a more colorful 16 bit game than something on the PS2. The whole game has a hand drawn feel to it, especially the main characters. The concept art is fairly good looking, albeit generic. It’s too bad that Gust chose to reuse the same monsters from Atelier Iris 1, we’d like to see some new creative monster design. Like a lot of other J-RPGs, Atelier Iris 2 has an anime feel to it. It’s only fitting that in between scenarios there are anime cutscenes. The English dubbing is decent. One generation ago it would have been considered great, but so many games are doing a great job with voice acting Atelier Iris 2 falls to the wayside here. Like the graphic style, Atelier Iris 2 sticks with having high pitched female voices and an effeminate male lead. It’s a good thing that NIS America left in the original voices so players can pick their poison. Like Eternal Mana the soundtrack is top notch. It has a fantasy feel to it and there are multiple battle themes.

If you’re into dramatic storytelling RPGs Atelier Iris 2: The Azoth of Destiny isn’t going to amaze you. Gust’s sprite based RPG is firmly rooted on exploration gameplay and not watching cutscenes. Atelier Iris 2 has some great ideas like the two player scenario system and a clever battle system. However, both of these elements aren’t completely tweaked. Fighting tactics can be ignored because choosing charge attack wins most battles. Alchemy plays more of an important role, but only if players spend time to scout out recipes. Atelier Iris 2: The Azoth of Destiny is designed for hardcore RPG fans and retro gamers who want to invest time in discovering hidden treasures in the world of Eden.

We checked out the North American version of Atelier Iris 2, which was localized by NIS America in English.

+ Pros: The two world system and set amount of enemy encounters encourages players to explore the world more than other RPGs.

– Cons: Gamers have seen the same plot line in Atelier Iris 2 done better too many times.

Overall: Gameplay wise Atelier Iris 2 is made for the hardcore RPG fans who like to spend time leveling up and scouting out for items. It is a change of pace from modern RPGs, which revolve around players cleaning out dungeons to see the next cutscene.