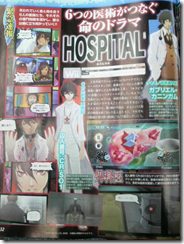 Famitsu explains the game has six different doctors including the mysterious looking doctor with glowing red hands seen in the scan. CR-S01 was a criminal released under a deal that he helps the team. You also get to play as a paramedic, forensic analysis specialist, and plastic surgeon. Screenshots show players putting skulls back together, maneuvering an endoscopic camera with the Wii remote, and yanking an iron beam out of a liver. Hospital looks intense and the manga style cutscenes look like another great addition. Sort of reminds me of Black Jack.

No release date for Hospital has been announced at this time. However, it’s a good time to mention every single Atlus developed medical drama game arrived in North America first. Perhaps, Atlus USA is saving Hospital as one of their E3 games. I wouldn’t be surprised if it appeared with the Trauma Center brand attached to it too.