In the 1950s, the prospering Japanese film industry reinvented the “monster movie.”

The giant monsters of the era were “kaiju” that often symbolized the effects of pollution, such as radiation and hydrogen bomb experiments.

In the 1960s and ‘70s, the “hero show” was born. Brave heroes challenged the kaiju on prime time television, and the entire nation tuned in.

The heroes were just as big as the monstrous kaiju, but they were more like friends to the children of Japan, or even a father that would protect them, no matter the sacrifices he had to make. 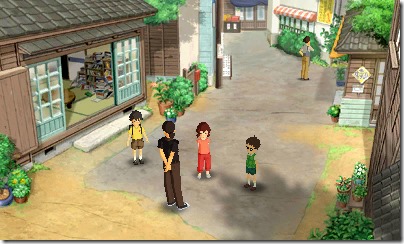 It’s not every day that you come across a title like Attack of the Friday Monsters: A Tokyo Tale, a strange nostalgic trip to the Japanese ‘70s, with lots of love for tokusatsu (special effects) films of that era. Being one of latest in the line of Guild games from Level-5, Friday Monsters is the product of Kaz Ayabe, the creator of the Summer Holidays 20th Century (Boku no Natsuyasumi) series, which bears many similarities to this game actually.

The West having never gotten to experience any of his prior work, may not be all too familiar with Ayabe, but he has had success over in his home country, and is known for his child-like  wonder, and atmospheric games.

It being the first Ayabe game to finally come out in the West, I was very excited to try Attack of the Friday Monsters; I always wished to play the Summer Holidays games but never could because of the language barrier. So, how exactly does this game hold up? Well to put it in the simplest of terms, the game accomplishes what it sets out to do. 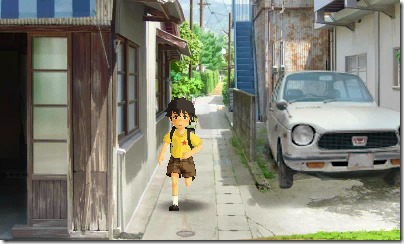 Friday Monsters from the outset begins with this cute, almost anime-like opening song singing about what it means to be a kid. When the song ends, the player is thrown into the shoes of Sohta, a young 10-year-old boy who just moved into Fuji no Hana with his parents, the Dry Cleaners at the end of the Summer 1971. Sohta is soon busy running errands for his parents and ends up meeting with the neighborhood kids, the local bullies, the employees of the local TV station, and the plain whacky inhabitants of his new home.

The game’s characters have a lot of whimsy and charm; the localization really hones in on this, and delivers some cute puns and generally funny jokes. It’s a strong effort on Level-5’s part and makes the game a blast to read, which is good, because you’ll be doing a lot of reading. The translation choices keep most of the Japanese terminology intact, including honorific suffixes. Most of the terminology like ‘kaiju’ is explained in the dialogue, so as to not leave those less familiar with Japanese out of the loop, but the honorifics are never really explained.

There is an amount of spoken dialogue in the game, mostly through the voice of a narrator who narrates the action going on the screen, and occasionally says out loud what Sohta is thinking. All the acting is left in its original Japanese with the speech bubbles being in English. When there are no speech bubbles, the game uses English subtitles. 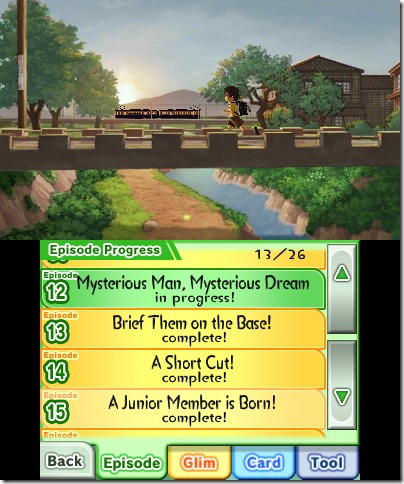 Attack of the Friday Monsters is pretty straightforward, with you navigating Sohta around town using the 3DS Circle Pad. Talking to the residents of the town can unlock new ‘episodes’. The game consist of 26 episodes, of course, just like a lot of anime. These episodes are relayed out of order, and some can be short, even completed by accident in less then a minute, such as finding a hidden pathway to open a gate that was locked. Others can stretch on and are on the longer side.

Through the 26 episodes, Sohta and his friends will see miraculous and scary “monsters” scare off bullies. They’ll make new friends, experience first love, and just plain be kids. Friday Monsters can maybe be best classified as an interactive narrative experience. The game is light on play mechanics, with a card game included to mix things up a little.

Oftentimes, Sohta will have to run an errand in order to get a resident who is blocking his path out of his way. But another way to progress is through the game’s monster card game. While exploring the town you will find ‘glims’. You can’t really miss them since they’re big glowing orbs on the ground. Walking over them causes you to collect them, and eventually when you get enough, they give you a card. 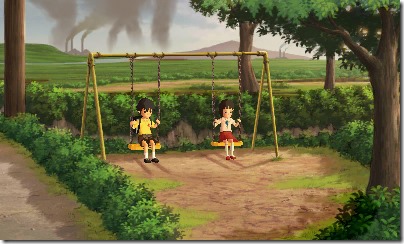 When you beat others in the card game, and when you finish an episode you are often awarded even more glims. Another added bonus of wining card games is that it turns the loser into your servant. The game lets you chant your own custom made spell (picked by a set of pre-made voiced options). Once you say your spell, the loser falls over and then must listen to you. The loser may even give you helpful hints. The card game itself is simple enough and mostly plays like a randomize match of rock-paper- scissors, but it helps to give you more to do in the game, and by fusing cards together it does allow for a little more depth in the card game aspect.

Though it is limited in content that the player can “do,” there actually is a lot to see and experience in Attack of the Friday Monsters. Additionally, a nice soundtrack, and very pretty visuals help make playing the game a joyful experience. Some of the pre-rendered backgrounds really are gorgeous to behold, and show off what the 3DS can do nicely. 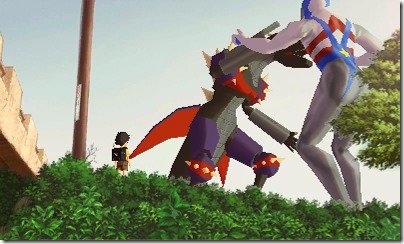 If you allow Attack of the Friday Monsters to sweep you up in its pace, the game becomes something really special. This is one of those games that isn’t played, it’s experienced. That’s how Ayabe accomplished his goal; the game truly makes you feel like a kid again. The appeal of the game at first may seem limited with its obvious Japanese setting, and sentimentalities, as well as a cultural barrier in place, but through playing the game, these all melt right away. At its core, Attack of the Friday Monsters isn’t really about monsters. It’s not even about 1970’s Japan or card games either—it’s about being a kid, and everybody can relate to that.

1. The subtitles are in white, I would have preferred them to be a brighter color like yellow so they don’t bleed into the background; white on white is a nightmare.

4. The story of Cleaner Man is one of the most adorable tokusatsu hero stories ever.