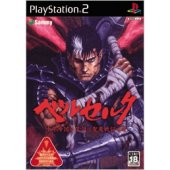 Yukes, known for working with the Berserk license releases a successor to Sword of the Berserk for the Dreamcast. This time around they’ve got a little publishing backup from Sammy Studios and the 3D power of the Playstation 2. So you would expect a more fluid game with the same characters you love right? Not exactly the case.

Berserk follows the same story as the manga. You’re in control of Guts a badass swordsman with the power to induce his rage and go Berserk. In the story you’ll also see Griffon, who Guts fought and lost to and Zodd, who Guts will fight early on. Berserk has some excellent cut scenes that really capture the art style of the game. You have some incredibly detailed characters and some good voice talent to compliment it. It is a plus to see that the series made such a seamless transition from manga pages to a full fledged 3D game. The monsters you fight look incredible too. The snow monsters blob out of the ground to surround you and fighting a huge Zodd is incredible.

You’ll be doing a lot of fighting in Berserk, in fact that is all you’ll be doing. Guts can unleash a standard attack with the square button and a heavy attack by pressing triangle. You’ll find out quickly that pressing square over and over is the best strategy in the game. Guts will endlessly swing his sword back and forth as long as you keep hitting square. This will be enough to beat most of the enemies and some bosses. While this certainly looks cool, it would have been better if the game had a set combo system. Instead it feels like you don’t really have a lot of control over Guts. You’re making him slash his sword, but you can’t control the direction of the slash. As you rack up kills Guts’ berserk meter fills up. By pressing R2 you can use the meter at any time to give Guts increased speed and more damage. When he’s under berserk mode Guts can demolish a bunch of enemies at once.

Guts has a couple of tools that you can get access to by holding down L1 or L2. The first set are a bunch of weapons. He’s got a flamethrower arm, grenades, kunai and a crossbow gun. For the most part the tools are useless. The kunai doesn’t actually kill anything and the crossbow gun makes Guts stand in one place so he’s left out in the open. The grenades and flame thrower can be useful for taking out groups of enemies. Although, once you use any weapons you have to wait before you can use it again. Both of the useful weapons have a wait time of a couple of minutes, which just makes them worthless. Guts can also call on fairies to give him a defense bonus for a little bit of time or heal his wounds.

Berserk also has a really basic level up system for Guts. You increase Guts’ attack, rage time, or defense. Although, you’ll need a lot of experience to upgrade anything. The main way to get experience is to chain enemies that you’re fighting. If you successfully kill monster after monster you’ll get a combo bonus. Most of the time, this bonus is much larger than the amount of experience you would get from just killing each enemy individually. The problem with this is that the experience system is set up in such a way that you must sit there and fight the same things for hours if you want to make your character a little bit stronger.

Another huge flaw in the game is that there is nothing to do besides fight, fight and fight. Once you clear a set of monsters from a screen, more will immediately spawn in their place. If you’re the type of player who stands there to stop and kill everything you’ll be waiting forever. Alternatively, you can choose not to fight at all and keep pressing the circle button to run past enemies. As you progress in different chapters you can expect more killing or more dashing away, whatever your gameplay style is. In any event all of this makes Berserk extremely repetitive and pretty boring to play.

Boss fights within the levels spice the game up a bit. During a boss fight you’re put in an enclosed arena where you go head to head with a huge monster. Guts can use all of his normal attacks and tools to fight. If you successfully parry or block an attack you’ll move into a full motion fighting sequence where you have to mash a button to win a duel. These dueling sequences look incredibly cool. One of them has quickly sidestep, parry an oncoming attack and then deal out a low slash. If Guts can do all this how come you can’t do it while you’re actually controlling him?

Berserk is a game that doesn’t live up to the potential it could have had. It ends up being a below par hack fest. If it wasn’t for the excellent presentation and graphics even fans of the series would shun it. If you really, really, really like the manga there is a chance that you’ll enjoy playing as Guts. On the other hand, there isn’t enough of a "game" in Berserk to recommend it to anyone else.

The game is easy enough to learn and figure out without knowing any Japanese. If you want to understand the story, you’re on your own.

It is possible that this game will come to America. After all Sword of the Berserk was released here two years later.

– Cons: All of the flashiness doesn’t make up for boring gameplay.

Overall: Even with the high amount of production that was put into the game, Berserk just isn’t a solid action title and it’s a mediocre hack and slash title at best.