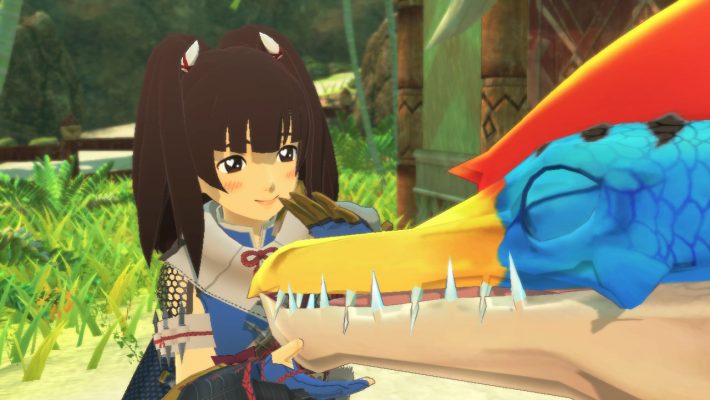 In Monster Hunter Stories 2, you’re going to come across a lot of potential Monsties and “best” is a subjective term. However, due to things like their general attack “type” and field skills, there are some that are more helpful than others early own the game. These are ones who, as long as you have them in the party, you’ll be able to reach new places and do more things. Yes, eventually they will all be outclassed. (Likely by the midway point, if you don’t do a lot of Rite of Channeling ceremonies for new genes.) But when you first start your adventure, they’ll be great.

Acquisition Method: Kayna gives you Ranmar after the tutorial. They’re also found in blue and orange spotted eggs. These eggs are common.
Area Found: Hakolo Island
Field Skill(s): Jump
Type: Speed
Why it’s great: You will do a lot of jumping in Monster Hunter Stories 2 and, while many Bird Wyverns like Velocidrome will have the field skill, there’s something about keeping the first on elf your Monsties around for a while that’s the best. 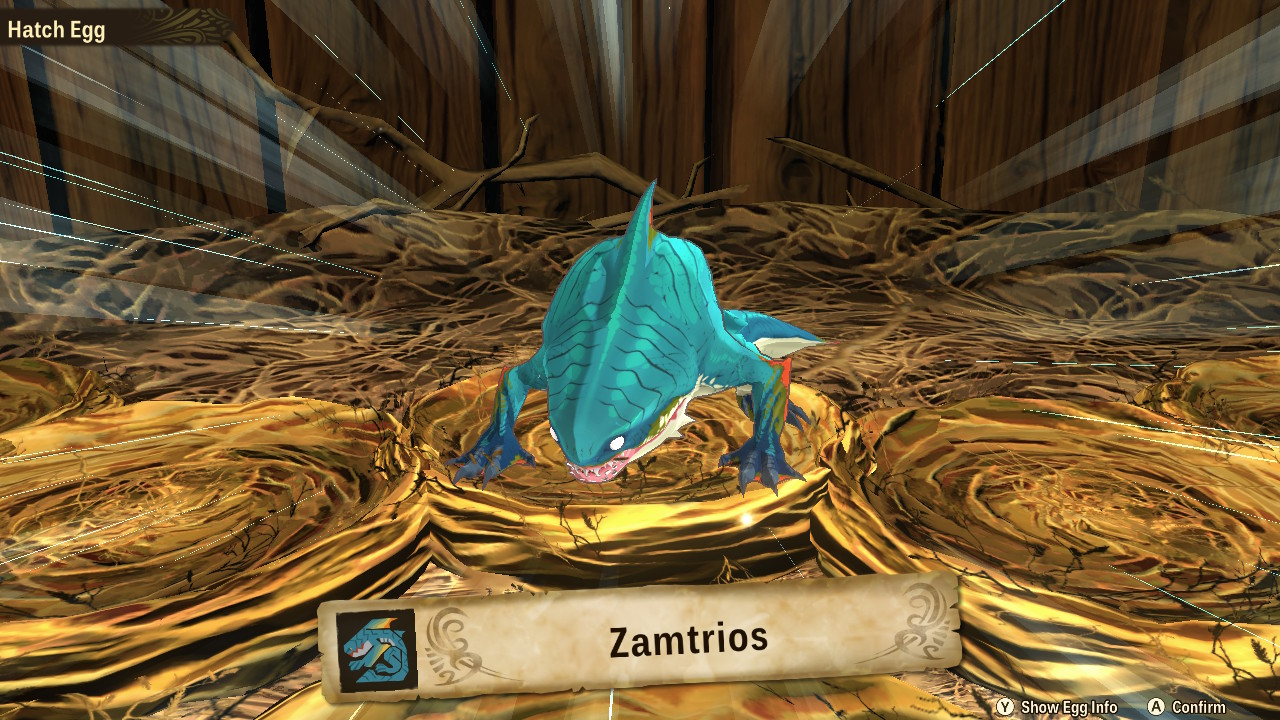 Zamtrios is Your Baby Shark

Acquisition Method: Eggs with thin, vertical, staggered lines. They are everywhere and quite common.
Area Found: Loloska
Field Skill(s): Swim and Monster Search
Type: Technical
Why it’s great: Okay, so Zamtrios isn’t going to be the first of the best Monsties for swimming in Monster Hunter Stories 2. That’ll be a Royal Ludroth from the Alcala area. But you won’t really need one that can swim until you hit Loloska. And Zamtrios is great for that because it is incredibly strong and has two helpful Field Skills instead of one. You can also use it to find monsters on maps, which is handy for quests.

Acquisition Method: You’ll have a chance to get an egg for one immediately after a story mission. Its eggs have a pink striped tiger pattern on them. They’re rare.
Area Found: Alcala
Field Skill(s): Stealth
Type: Speed
Why it’s great: Sometimes, you’re going to want to only get eggs, gather, or look for dens. You won’t want to get into battles. Nargacuga is the first Monstie you’ll encounter with Stealth, which is invaluable.

Kecha Wacha is All Ears

Acquisition Method: Eggs, in particular the ones with sort of a spiked clump pattern on them.
Area Found: Loloska
Field Skill(s): Bug Search and Ivy Climb
Type: Technical
Why it’s great: Up until you hit Loloska, you’re going to see so many ivy patches you can climb, but won’t have any Monsties that can climb them. Kecha Wacha will likely be the first Monstie you get that can climb. (Right around the same time as both Nerscylla and Congalala, to be honest.) But Kecha Wacha is handy because you can also mark bugs on the map, and bugs are one of the most difficult gathering items to “spot” while exploring. 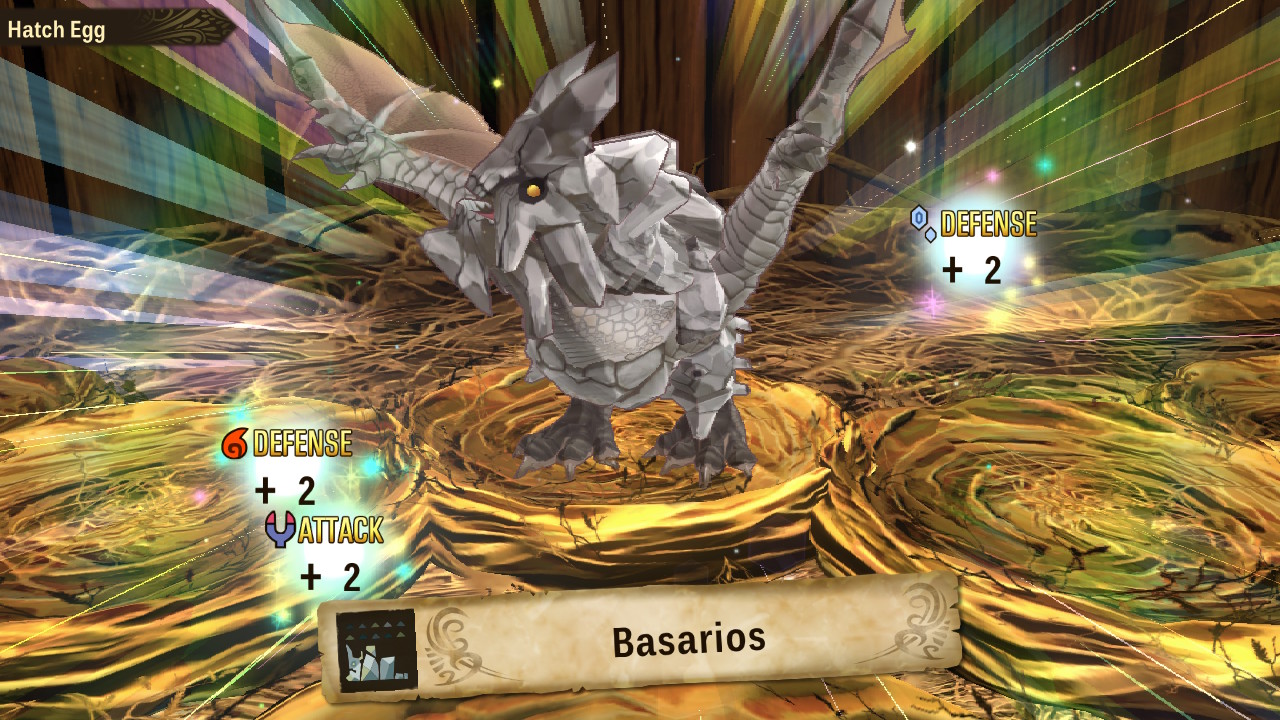 Acquisition Method: You’ll want a beige egg with brown tiger stripes. I’ve also only found them in Rare Dens.
Area Found: Alcala
Field Skill(s): Ground Dive and Ore & Bone Search
Type: Technical
Why it’s great: Basarios is one of those Monsties where you’ll probably find it right about when you encounter your first Ground Dive spots. And having the ore marking ability is handy too. It also has incredible defenses. The thing is, this is one that is incredibly difficult to find and Paintballs don’t seem effective to get it to retreat so you can get an egg. So keep an eye out for gold dens! And also, keep in mind that when you hit Lamure, you’ll definitely be upgrading to a Diablos that knows Ground Dive and Roar.

Acquisition Method: You’ll only find them in eggs. They’ll be white with pointed splotches on them.
Area Found: Loloska
Field Skill(s): Dash and Rock Breaker
Type: Speed
Why it’s great: When you’re in the overworld, you’ll have a lot of ground to cover! In Monster Hunter Stories 2, you won’t come across rocks to break terribly often. So until you find a Lagombi, a Bulldrome with Dash from Hakolo Island is fine, if you want to cover ground quickly. But once you do reach Loloska, you should get a Lagombi and use it to swiftly get around and deal with the rocks you’ll find in the area blocking treasure.

Monster Hunter Stories 2 is available for the Nintendo Switch and PC.