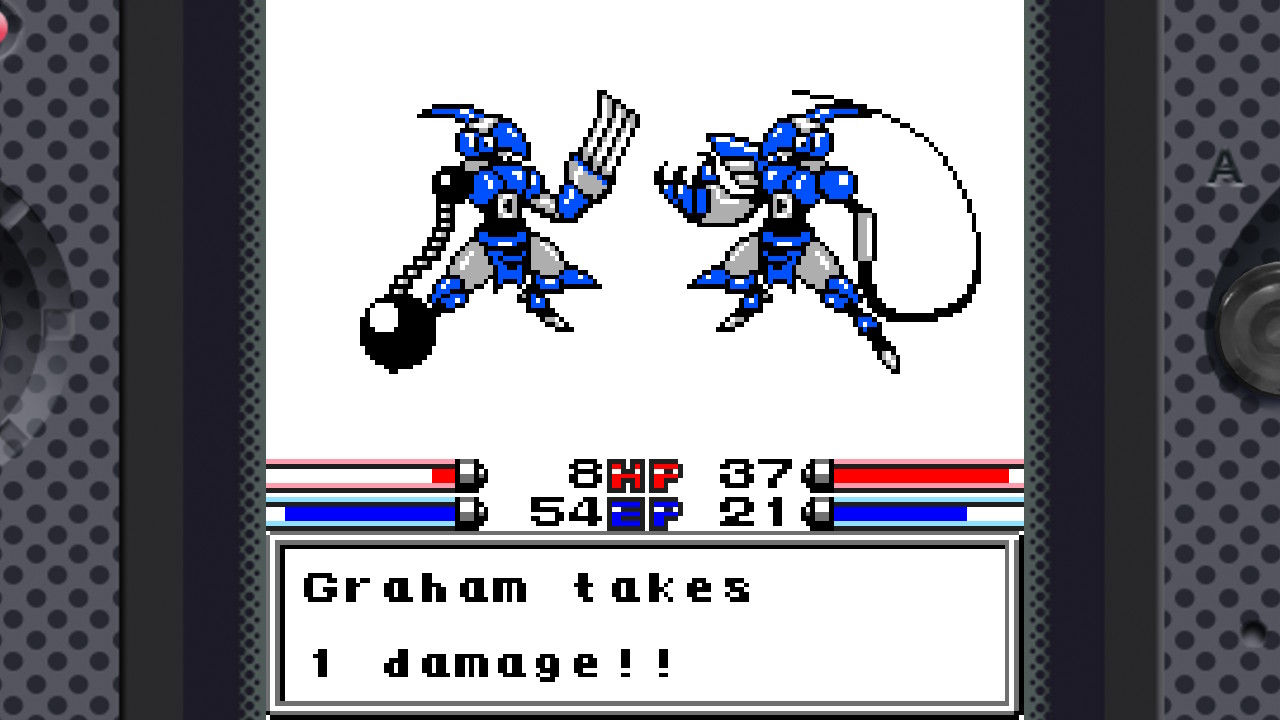 The latest NeoGeo Pocket Color Selection release, Biomotor Unitron, continues the line’s diversification beyond its initial fighting game focus. Interested in checking it out? We’ll break down what you need to know.

What is Biomotor Unitron?

Originally released on the Neo Geo Pocket and Neo Geo Pocket Color, Biomotor Unitron holds a special place in owners’ hearts as something of a Pokemon competitor. It certainly isn’t a one-to-one comparison, but the turn-based battling RPG gives players a lot of customization and a focus on facing off with friends.

In Biomotor Unitron, you outfit a mech with limbs and packs that affect abilities and stats. Navigation is largely menu-based, and the game encourages you to talk to townsfolk and hear their quips and advice. There’s a bit of control in battle, but this is largely a challenge of preparation. The combination of parts and how you balance your equipped attack types determines victory.

How does it hold up today?

As NGPC games go, Biomotor Unitron has the most trouble with the limited screen resolution. There are a lot of menus, and those menus include short abbreviations you just need to learn. It’s a lot like early Game Boy RPGs in that way, but its late-’90s peers had learned to fit more on screen or generally handle things better. It’s a problem that the Japanese version of the game likely doesn’t have, but English? English doesn’t like those character limits.

Other than that? Yeah, you can have fun with it. Its more traditional gameplay means there’s less of an incentive to play than Card Fighters’ Clash or Faselei!, but it’s an important part of the Pocket’s library and we’re glad more people can check it out. In some ways, Unitron was ahead of its time! Its gameplay loops and randomized dungeons feel modern, in a way. But you need a very old-school patience to stick with it.

What about the Switch version of Biomotor Unitron?

Well? It’s about what you’d expect, we suppose, but with a couple of caveats. For one, the game’s link functionality is disabled. We don’t get the fancy setup of Card Fighters’ port, nor do we get any sort of multi-system play. Also, for some reason, the coolest NGPC colors aren’t available as display options? That’s a weird one, because other releases had them in. Is it possible that this release was an earlier project but held until now? Also, it’s hard to consider this new version without thinking about where your money is increasingly going.

Still, there are a few nice elements. The original manual is fully scanned, explaining elements of a game that really could use as much explanation as it can get. This is a game that wants you invested in its world and characters, but it simply doesn’t have the text space to do so effectively in-game.

The NeoGeo Pocket Color Selection version of Biomotor Unitron is available now on the Nintendo Switch eShop. The game’s also available on, well, the Neo Geo Pocket Color if you can find it! Other recent NGPC Selection titles have included SNK vs. Capcom: Card Fighters’ Clash and Big Bang Pro Wrestling.