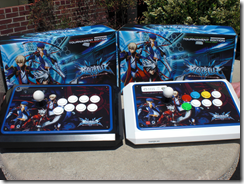 Blazblue fans, Aksys has an arcade stick just for you. MadCatz, the makers of the Street Fighter IV stick and Resident Evil 5… everything, have an official Blazblue: Continuum Shift stick.

That’s it on the right.

Arc Sys/Aksys’ Blazblue arcade style controller has eight buttons with optional turbo built with Sanwa Denshi parts. The joystick can be configured as a D-pad, left, or right analog stick if you use it for games other than Blazblue. Deathsmiles comes to mind… and with a 13 ft. USB cord you might be able to reach your couch without an extension cord.

The Blazeblue: Continuum Shift limited edition tournament joystick is $199.99. Aksys is only making 3,000 of them – 1,500 for PlayStation 3 and 1,500 for Xbox 360. Each one is an individually number joystick. Check out more photos of the stick and click on to the order form on Aksys’ home on the Internet.