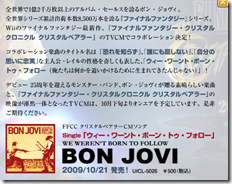 Out of all the J-pop artists, idols, and bands Square Enix could have asked to do the music for the Final Fantasy Crystal Chronicles: The Crystal Bearers commercial they selected Bon Jovi.

His single “We weren’t born to follow” will be used in the upcoming ad scheduled to air in Japan later this month. No word if the song will be in the game or if Square Enix USA is considering the same marketing plan.

Never thought I’d see a cross promotion with Final Fantasy and Bon Jovi, but I never imagined a Final Fantasy game with a Dead or Alive Xtreme Beach Volleyball mini-game either.