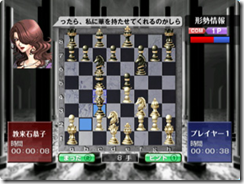 Look, Bubble Bobble Plus has always been on track for an international release. An ESRB leak (thanks Justin!) just reaffirms Bub is coming to our shores sometime in the future.

Also found on the ESRB is a rating for Silver Star Chess, a WiiWare chess game published by Electronic Arts in Japan. Agetec, who has been very quiet recently, will publish it here.

I know you must be jumping out of your seat because a WiiWare chess game is coming, but seeing Agetec license Silver Star chess is more interesting than the actual release. Plenty of small Japanese publishers released titles on WiiWare which have been for Japan only since they don’t have an international base. Silver Star Chess, even though it’s published by a local US company, was one of WiiWare’s orphaned games. Now we know Agetec is starting to look at licensing some of these games. Perhaps, they will be brave enough to pick up Sorcery Blade or the wacky Shootanto.

Sudoku – We All Play and Battle Poker sound like other WiiWare leaks from the ESRB.  See if you can match the description with the title.

This is a puzzle game in which players arrange groups of jumbled cards to create five-card poker hands. Players earn points for each hand created and are rewarded more points for higher five-card combinations.

This is a puzzle game in which players assign numbers to a grid to solve various mathematical sequences. The game provides varying degrees of difficulty along with thousands of number grids.