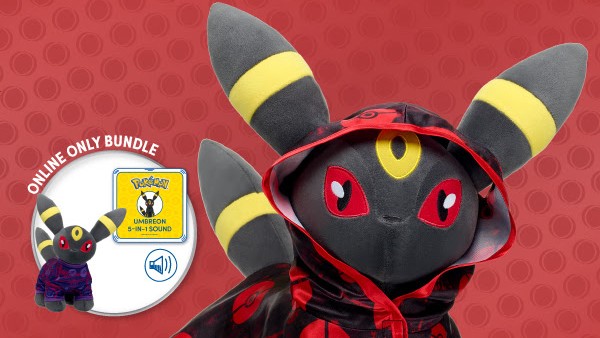 Build-a-Bear revealed that its next Pokemon plush is Umbreon. This marks the fifth Eeveelution to join the retailer’s lineup. It is $40/£29.50 alone with the five-in-one sound chip. People can also get a $65/£49.50 bundle that includes the character and some outfits from the online storefronts.

Umbreon is the dark-type version of Eevee that evolves at night once someone has befriended it enough. It debuted in Pokemon Gold and Silver alongside Espeon. Which, as it happens, was also introduced at Build-a-Bear at the beginning of August 2021. The Build-a-Bear online bundle for Umbreon includes the character with sound chip, an Umbreon sleeper outfit, and an Umbreon cape. Both the cloak and pajamas would each normally cost $12.50 when sold separately.

This also comes following a number of Eevee-related Build-a-Bear restocks. In addition to Espeon and Umbreon, both Flareon and Jolteon are back in-stock. Each one’s bundle also costs $65/£49.50. The original Eevee is also around. This means the only Eeveelution Pokemon plush not at Build-a-Bear at the moment is Vaporeon.

This means there are still three evolved versions of Eevee unaccounted for in the Build-a-Bear Pokemon collection. The company hasn’t said when or if Glaceon, Leafeon, or Sylveon will show up.

The Build-a-Bear Umbreon plush is now available at stores and online.