Details on exactly how Bukkaku will play are scarce and the teaser barely alleviates that. But its creator seems to have determined what the art style is at least.

They describe it as bringing the “popular style called Kawaii” to Mexican art styles. It all looks like crystalline, sharp-edged pieces of pastel-colored felt – soft and hard together. “It’s actually very close to folding origami, which folding principles is one of main concepts of complexity and beauty in the game. The game will be based on polygon art (flat for now),” writes the creator. 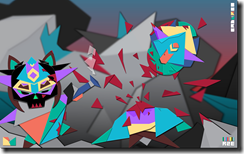 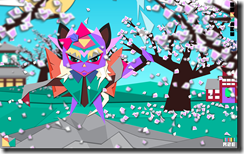 As to the game itself, it’s said to take place around Asia and seems to be a brawler or fighting game of some kind as it follows a character that the creator describes as “Pokemon samurai with weapons and spells.” Apparently, they’re trying to emphasize both the cute and terrifying in this character, as they look adorable but are actually deadly – the game also has decapitations with blood spurting everywhere.

You’ll also be able to modify the look of your character. “Some characters will remind bugs and insect in general, others will resemble cute animals like owls and cats. You will be able to create and modify your own character with unique mask,” the game’s creator says.

If any of this interests you then you can track Bukkaku’s development over on its website.