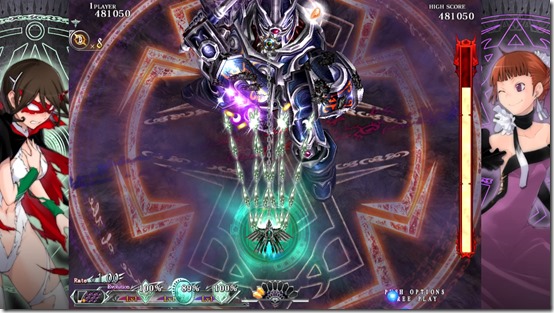 Shoot’em ups aren’t games you can leap into and immediately master. It takes time to learn exactly how they work. You need to learn the art of dodging, take note of how bullet patterns look, pay attention to enemy placement and positioning, and know what your own character is capable of accomplishing. Even if you’ve been playing an entry in a series you know and love or following a specific developer’s work, it can still take time to learn the ins and outs of specific titles. With Moss’ Caladrius Blaze, we’re getting a vertically scrolling shooter that goes out of its way to offer various options to ease people who’ve never played such a game into the genre.

Caladrius Blaze’s main campaign begins with a choice. People can go with Original, Evolution, or Arcade modes, with the first having the five base levels, the second six levels and two missions, and the third five levels and two missions. The varying lengths give people more unfamiliar with the game and genre different sorts of challenges. Original mode is the most basic and quickest option, perfect for a newbie. Arcade and Evolution are slightly more trying, as each have two missions that require you to either keep a certain percentage of enemies from going off screen or defeating a certain number of transport ships to free captured citizens. I felt like Evolution’s length and goals made it the best choice for someone familiar with this kind of experience.

From there, you get to set criteria for how you’re going to play. There are multiple difficulty levels to choose from, with a Practice option below Very Easy, for those who want the training wheels on. You can even turn a No Damage on, to protect against certain sorts of bullets. It’s even possible to pick particular stages, should you want to really investigate an area or study a boss. Likewise, you can crank things up to higher difficulty levels, in the hopes of pushing and bettering yourself. 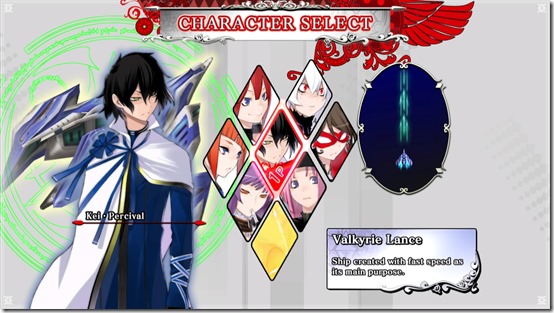 I even feel like the wide assortment of characters in Caladrius Blaze makes for an easier adjustment. You have eight possible players to choose from: Alex Martin, Kei Percival, Nightmare of the Lilith, Noah Twining, Layis Naje, Sophia Fulcanelli, Maria Therese Bloomfield, and Caladrius. Each ship has its own strengths and weaknesses, as well as three sorts of special attacks that can be enhanced with Elemental Gauge points. Caladrius is essentially god mode, since it is the goddess’ agent. Noah has Eihwaz Virtue, one of the most balanced ships, and it’s strong, well protected, and speedy. Nightmare of the Lilith’s Crawling Judge description specifically says it’s “difficult to handle.” With complete descriptions and basic bullet pattern previews, people have an edge and opportunity to see which one might best suit their skill level. None of them are locked away, so you’re immediately able to try everyone out.

Going into options gives even more opportunities to ease or increase your burden. You can choose how many lives and bombs your character will have. Adjusting the number will cost you the opportunity to appear on leaderboards, but does allow you to alter the game to your liking. Seeing as how even the Easy difficulty level can surprise an unsuspecting or unfamiliar player, it’s a nice setting to offer. Personally, I went with fewer bombs, as I preferred using the more conventional weapons and attacks.

All of this works rather well, because Caladrius Blaze is quite a visually appealing game. Suzuhito Yasuda’s character designs shine, making me feel like I was actually playing Caladrius Blaze: Devil Survivor. That, combined with the fanservice Shame Breaks, have a chance of attracting people who normally wouldn’t play such a game. Allowing all of these options and adjustments makes it more forgiving. People can grow with the game, learning from their mistakes and improving, adjusting the difficulty and modes as they go along.

Caladrius Blaze is immediately available for the PlayStation 4.