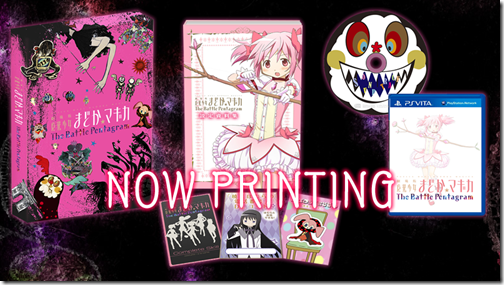 Namco Bandai is developing Puella Magi Madoka Magica: The Battle Pentagram for PlayStation Vita and the limited edition bundle has some unique items. On top of the game, you get an art book, Dessert Witch screen cleaner (I think that’s Charlotte’s second form), soundtrack CD, a code for five extra costumes, and a Voice World with Homura’s Time Travel.

What’s Voice World? It’s an interactive phone call with an anime character. You actually call the character’s phone number and then punch in a code to access the story. Namco Bandai developed this service and launched it with a bunch of [email protected] characters that players help during the call. The story changes depending on your responses so it’s kind of like a visual novel, sans the visuals.

The Puella Magi Madoka Magica: The Battle Pentagram limited edition retails for 8,980 yen ($90) and a standalone game is 5,980 yen ($60). The game comes out on December 19 and first print copies also include a Voice World code for Mami Tomoe’s Hotline.