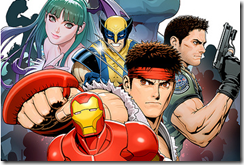 But, that’s nothing compared to their expectations of Monster Hunter Freedom 3. Capcom plans to move 3.6 million units when it launches in late 2010 in Japan alone. While no overseas publishing plans have been announced, sales should be higher when the game inevitably heads West.

Worldwide sales of Dead Rising 2 are a bit lower at 3 million. Lost Planet 2, which comes out this week, is another planned double platinum title with 2.2 million units in sales worldwide.

These figures are from Capcom’s fiscal year 2010 plan. Too high for Dead Rising 2? Too low for Marvel vs. Capcom 3? Have your say in the comments.