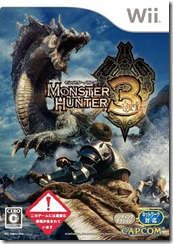 “In 2010, you won’t see as many Wii games from Capcom, but the ones we release will be much larger, event-size games,” said Chris Kramer, senior director of communications and community at Capcom to Gamasutra. “I also expect to see the market dominated more and more by Nintendo releases with fewer games from the major third parties, like EA, Activision, and Ubisoft.”

Capcom was one of the early supporters of the Wii with Zack & Wiki, which used motion control in an intuitive way. After the charming adventure game Capcom filled their Wii lineup with ports such as Resident Evil 4: Wii Edition, Okami, and the Resident Evil Archive series. Doesn’t sound like Capcom is going do that anymore, even though killer7 would probably be better with a Wii remote.

This year, Capcom USA will bring Tatsunoko vs. Capcom: Ultimate All-Stars and Monster Hunter Tri, one of Japan’s top selling games in 2009, to stores. Meanwhile in Japan, Capcom only has Resident Evil: The Darkside Chronicles on their plate as a Wii exclusive. Sengoku Basara: Samurai Heroes, which comes out in Japan in spring is for PS3 and Wii. Thanks for the reminder AQuatermain!