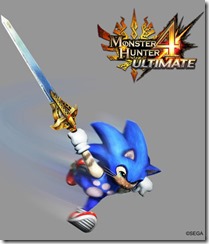 Monster Hunter 4 Ultimate has a bunch of crossovers with other franchises in Japan, a number of which actually are being included in the game’s western release.

Among these are the Zelda costumes that let you dress up like Link and use the Master Sword, and another piece of collaboration content that lets your Felynes wear armour based on Sonic the Hedgehog and use his sword from Sonic and the Black Knight.

Typically, a lot of Monster Hunter collaboration content remains exclusive to Japan, just because so much of it is based on Japanese IP that would be too complicated to license in the West, or not be worth the effort. However, in the case of Sonic, producer Ryozo Tsujimoto says the development team was conscious of the fact that Monster Hunter 4 Ultimate would be released in the West, and they wanted a franchise that would make sense on both sides of the pond.

“There are actually a few people at Sega that we’re pretty close to,” Tsujimoto said to Siliconera when we met with him recently. “We were chatting and thinking if there was something we could do together—some kind of collaboration. Then we settled on Sonic, ultimately, because he’s not only popular here in Japan, he’s also extremely popular overseas.”

“Since we’re doing an overseas version of this game, it made sense to do some sort of collaborative crossover that would make sense globally. So I had an associate of mine at Sega introduce me to the person in charge [of licensing]. We shook hands, made the deal, and there you go.”

Meanwhile, the Zelda crossover content came about in a similar fashion, Tsujimoto says. It was just a matter of finding something that the devteam liked and that made sense.

“As you know, Nintendo helped a lot with development and they’ve been very good partners, so we wanted very much to take some kind of a Nintendo IP and do some sort of crossover that seemed to make sense from our point-of-view,” Tsujimoto shared. “And of course, with us on the development side, when you think of Nintendo, the first thing you think of are Mario and Zelda characters. Certainly, for those of us on the devteam that are in our 30s and 40s, that’s exactly the first thing that comes to mind.”

“So, we started to think of what we could do with Mario and Link-type characters. It occurred to us… as you know, in Monster Hunter, you’ve got a Sword and Shield, and Link is the same way, so it would be a perfect match. So, we went over to Nintendo, discussed, got permission, and went ahead and did it.”

Monster Hunter 4 Ultimate will be released in the West in early 2015.