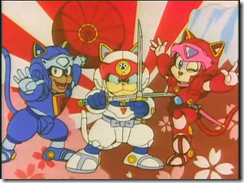 When developing the Tatsunoko vs. Capcom: Ultimate All-Stars Capcom talked to Tatsunoko Productions about using the Samurai Pizza Cats.

Saban picked up Catto Ninden Teyandee from Tatsunoko and released it here under the name Samurai Pizza Cats. Since the show aired in North America these characters would have been a perfect fit for the international version of Tatsunoko vs. Capcom.

“We at Capcom too, wanted to see the Samurai Pizza Cats in the game. We were in discussion with Tatsunoko productions to try to get them in the game. It went right up the last minute, but it didn’t go through,” Ryota Niitsuma, Producer said during a web chat earlier today.

Speed Racer got the Hollywood movie treatment so why not put him in? “They thought about Speed Racer, but he’s just a race car driver. It would be hard to incorporate his race car into the game,” Niitsuma contemplated.