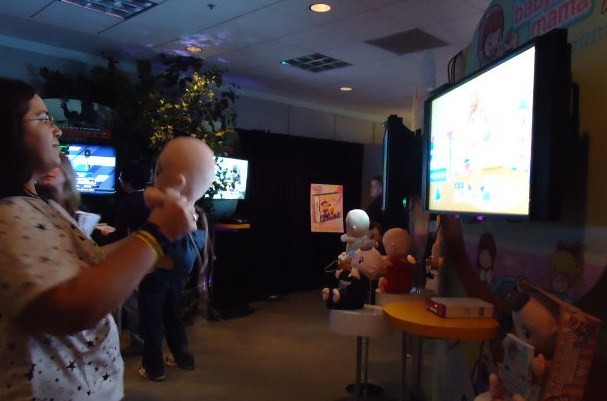 Ah Babysitting Mama. I was so willing to joke about the game before I tried it at E3, and now I find myself hoping to actually buy it when the game comes out! How did such a drastic change occur? Well, it all happened when I was actually able to play the game last Thursday.

The Babysitting Mama demo at E3 had two babies to play with, Master Yuto and Miss Lucy. Each baby had its own mini-games and personality, so you’d have a different caretaking experience with each one. I decided to go with Miss Lucy to see how things went.

I was then handed a baby. See, Babysitting Mama comes with a plush baby peripheral (which looks a lot like Master Yuto) that you stuff the Wii remote into. The nunchuk is also used and hangs out the back.

The first thing I had to do was calm down Lucy. This involved rocking her, though it was really more like strategic swaying. I was horrible at this part. I didn’t realize you didn’t just follow Mama’s movements, you had to wait for a direction mark to appear before starting to rock.

Then it was time to feed her. I had to hold the nunchuk directional stick down for this part to make sure she got enough milk, but not too much. It was fairly simple, and I didn’t have to hold her in any special way to do so.

After that was burping time. You hold the plush baby like you do a normal baby, and tap the back when indicted on screen to make it burp. It was at this time that I noticed the plush baby was making noises, thanks to the Wii remote inside of it. So if the baby on screen burped, the plush baby I was holding burped too.

I also got to play with Lucy. This meant playing with her on a see-saw and getting a mobile to play music for her. The see-saw game was a lot like the rocking game. I’d have to lift the baby up and down in time with on screen cues to make her happy. The music mobile game involved keeping a gauge around a music note on a gauge with the nunchuk directional stick so music would play.

Finally, it was time for Lucy to go to sleep. This meant it was time to return to the rocking mini-game. Surprisingly, I didn’t learn anything from the other mini-games, as I only just barely was able to rock Lucy to sleep.

I also was able to watch my friend as she played through Babysitting Mama while caring for Master Yuto. The mini-games were quite different, and the only similar ones were the initial and ending rocking games and the see-saw game. Instead, Yuto had mini-games where you could race him against other babies and wash his hair.