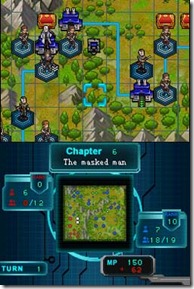 Castle Conqueror – Heroes 2 is the second game in the Heroes subseries of Circle Entertainment’s Castle Conqueror series. The game takes place two years after the first one, although this is hardly an important detail as the game pays relatively little attention to story and characters. Heroes 2 focuses on strategic gameplay, which is simple yet challenging at the best of times and downright brutal at others.

The gameplay system for Heroes 2 is simple to the point that it is completely possible to play the game without reading what meager information the in-game manual provides. The battles are turn-based, and you basically choose and click the unit you want to move, where you want to move it, and what you want it to attack. That’s more or less it.

OK, so there are a couple more things to keep track of. For example, there are several kinds of units, but rather than having a rock-paper-scissor relationship like in many other games (from what I can tell), the units each only have one attack that differ in attack strength and range. Units with a firearm can attack others two boxes away on the grid, while those with a sword can only attack adjacent units. Some units are better for carrying out single attacks, while others are more powerful in sieges. 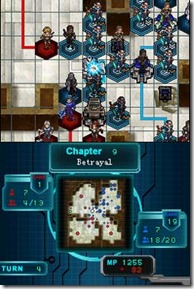 A siege attack is the game’s answer to combos. After you have at least one two units stationed around the same enemy, the siege attack allows all your units surrounding that one unit to attack once. This means that essentially, you can have every unit attacking twice if both your units use siege attacks.

In addition, if your units stand on certain areas with a line running through them (representing a supply route from one building to the next), they will be healed a small amount every turn. This is the only way to replenish HP for units, as thus far I haven’t seen any healing units.

In fact, the game practically encourages sacrificing your units. Every one of your units (and I keep using that word because they really are that generic) other than Commander units are completely expendable. Their loss won’t affect your story any, and in fact you can create another unit immediately in your base.

Unfortunately, this also means that the opponent plays by the same rules, and if you’re not careful, you can find yourself against a viciously regenerating army as you complete the objectives for the mission.

The Commanders are story-important characters and the missions usually revolve around them—keep your Commanders alive, defeat all the enemy Commanders, etc. They are often the most powerful characters, but more importantly, they each allow a certain number of characters to remain on the field. For example, if the opponent has two Commanders, they may be able to keep 6 units (including nameless units) on the field, but if you kill one, then they can only keep 3 on the field.

This makes Commanders natural targets. However, they often hang out in the back, and they have relatively large HP. (If you’re familiar with Starcraft, you can think of the Commanders as Overlords and the other units as Zerglings, haha.) 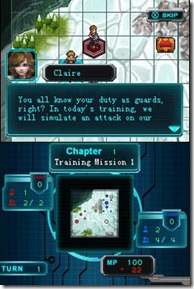 The same goes for the bases, which you can ‘defeat’ to capture. The buildings are where the units are churned out for a measly SP price, which can be accumulated through defeating enemies or opening chests on the battlefield, and each building can create as many units as you want in one turn. However, they also have enormous HP; plus, every time you attack them, they strike right back automatically.

All of these factors—the large HP of your two main targets and the easy regeneration of opponents—make for either a very challenging or a very tedious game, depending on your mileage. However, what it does for sure is change up your strategy from your average SRPG, which I feel is where Heroes 2 shines.

Despite the extremely simple system, the game kept me on my toes and forced me to think differently than just, “Overpower unit A. Move on to unit B. Repeat.” With Heroes 2, I had to be careful of defeating too many grunts because they’d just return immediately. However, I can’t ignore them because they can still pack a punch with their attack and especially with their siege attacks if they surround my units. In addition, the Commanders, who stay in the back, may suddenly charge forward and pick off my weakened units with their superior attack.

On top of this, the game loves to throw loops halfway through missions. Objectives may change, or reinforcements may appear right behind you as you’re just this close to winning. This means that if you kept your Commander in the back ranks, they’ll get wailed on by the newcomers with no hope of retaliation until next turn, by which your unit will be very well surrounded and assaulted by siege attack after siege attack. Good luck surviving that. 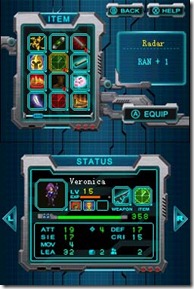 Castle Conqueror – Heroes 2 definitely stretched my strategy skills (almost nonexistent) and patience to the limit. Each of the 11 chapters (1 chapter per mission) is like a long boss battle with carefully planned moves and precisely-executed attacks, as sometimes, a mistake can destroy your chances of victory. In a way, Heroes 2 is like a puzzle game—or perhaps a chess game—that focuses heavily on the strategy and the challenge and has little care for story or characters.

1. The music ranges from passable to elevator music style.

2. The graphics remind me of Legos, for some reason. For some reason, the disparity between the art style and the onscreen sprites—and especially the generality of all the sprites—was a big mark down in my book.

3. The first chapter took me 3 tries to complete. The game has a tough learning curve, I think.