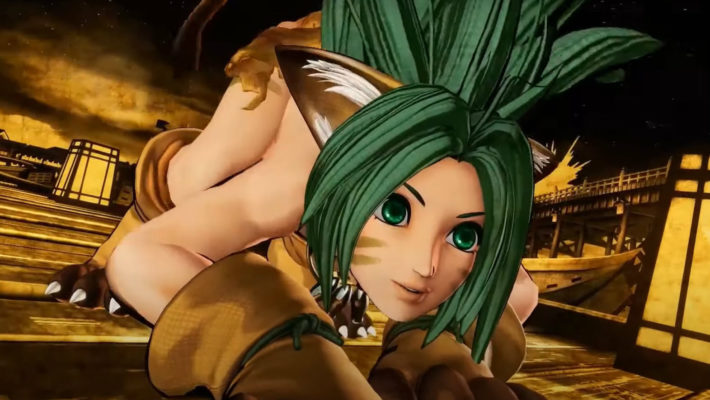 The preview for Samurai Shodown Season Pass 3 shows just a brief tease of Cham Cham dressed in animal hides and wearing cat paw gloves and a tail, all while wielding a large boomerang as her weapon. Hibiki was revealed using 2D character art and the logo from The Last Blade 2. Two more unrevealed characters will also be a part of the season pass and are expected to be revealed later in 2021.

In the full reveal video, Samurai Shodown Director Hayato Konya described Cham Cham as a fan favorite and said that he hoped to fulfill fans’ dreams and requests with her unique play style. As for Hibiki, he noted that she would be a great addition to the game thanks to her flashy move set, despite The Last Blade 2 being quite different mechanically from Samurai Shodown. Konya also teased mechanical updates to the game, including the addition of “Guard Crushes,” fighting game moves that can break an opponent’s block or cause them to be vulnerable after blocking for too long, as well as a full rebalance for the game and a system for preventing players’ weapons from being lost off-screen.

Cham Cham first debuted in Samurai Shodown II and is the younger sister of the character Tam Tam. Like Tam Tam, Cham Cham is a native of the village of Green Hell. Interestingly, she’s a contemporary of Darkstalkers‘ Felicia. Both characters appeared in the same year.

Hibiki is the daughter of renowned swordsmith Genzo Takane. She pursues the character Setsuna, who she holds responsible for her father’s death. Hibiki is described as a practitioner of the Musou Shinden-ryu school of swordsmanship and in The Last Blade 2 fights with a quick-draw sword style, similar to Samurai Shodown‘s Ukyo Tachibana.