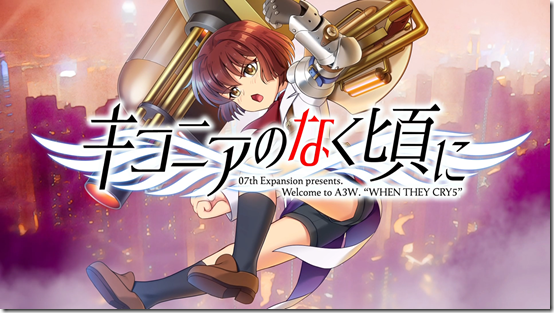 The fifth entry in the When They Cry series won’t be releasing in Summer 2019 as originally planned. The goal was to release Ciconia When They Cry at Summer Comiket 2019, which will runs from August 9-12, 2019. However, 07thExpansion announced on Twitter that the new release window for the visual novel is September 2019.

Witch Hunt’s Klashkari, who is working on localizing the game, offered an update on what is going on via a series of tweets. Due to its size and some necessary tweaking, it is being delayed. (Umineko no Naku Koro ni Saku is also being delayed as a result.) Apparently, Ryukishi07, the creator of When They Cry, is concerned about the project. He noted that the game can be critical and worried that the writing may not be what people expect. However, he is doing his best.

Back in April 2019, MangaGamer, 07thExpansion, and Witch Hunt confirmed the three were working toward a simultaneous Japanese and English release. No update has been provided to say if this will still be the case as of yet.

Ciconia When They Cry will be released for the PC in September 2019.