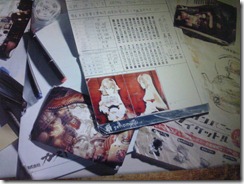 All of the teasers from Gust are about Ciel no Surge: Song of the Lost Star’s Offering, a new series in development for PlayStation Vita.

The main character is a young girl named Ion (short for Ionasol) who lost her memory. In Ciel no Surge players will interact with her by selecting choices using the touch screen (reports state this is a "communication game") and there is a bar code reading function that connects to the world beyond. One of these bar codes is hidden in Gust’s teasers. The game also has online connectivity, but how Gust plans on using it has not been detailed.

Ion has light brown hair and is said to be the girl from the teaser art (pictured here). While Ion is in the kitchen you can select things like: cook, create a combo meal, soup, salad, and pastry. Other commands shown in the magazine are "lets do something together," "lets go to the dream world," and "need time to decide." Players will spend three years caring for Ion.

The game’s world is called La Ciel and there is song magic. Songs control the sun, which is dangerous in the world. Ciel no Surge takes place in a floating city called Coron.

Ciel no Surge: Song of the Lost Star’s Offering is the first game in a new series from Gust called Surge Concerto, which has a concept of seven dimensions. Gust plans to use this world view as the base for several titles spanning different platforms. Ciel no Surge is first and it’s slated for release as a PlayStation Vita game on April 26.