Acquire is boasting about the number of avatars players can make in Class of Heroes 3. And that number is over 75,000.

Players start by picking one of ten tribes. Then a uniform (3 types), face (two per gender), hairstyle (four types), and hair color (eight types). Here’s a look at the last two selections. 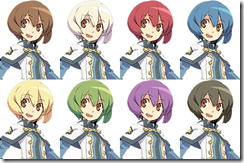