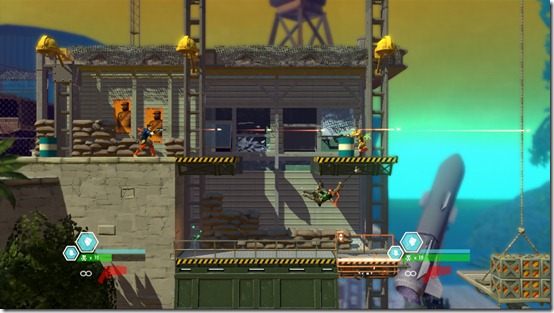 I completed through two levels of Bionic Commando Rearmed 2 at CES. A fellow game writer joined me for the first level and I unintentionally killed him a couple of times. Apologies! Player one controls how the screen scrolls if you move too fast, player two has to catch up or they lose a life. While I was swinging through the opening stage, sometimes I jumped to fast forcing him to take a leap of faith… into spikes.

The big change in Bionic Commando Rearmed 2 is the ability to jump. Sure, you need to swing to cross over most  gaps, but jumping makes the game feel faster. There are also opportunities to take slightly different paths or skip some platforms entirely. Fatshark, which contains "quite a few" members of the original development team from Grin, also gave Nathan Spencer a move from the console game, Bionic Commando. You can slam the ground with a powerful punch that’s strong enough to knock enemies and bridges out.

I still found barrels to be the most useful items. Nathan can grab barrels with his bionic arm and use them as a bullet blocking shield. Barrels also have the uncanny power to defeat any enemy they touch, which makes them more powerful than your gun. 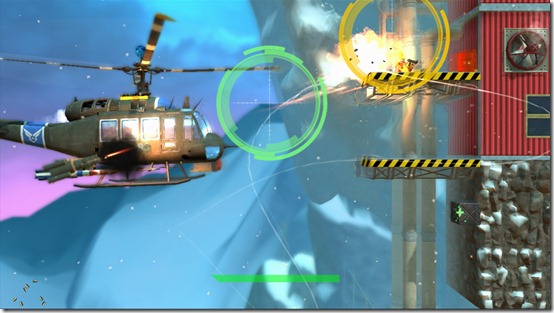 Well, not all guns. There are turrets to find in Bionic Commando Rearmed 2 that trigger sniper mode. This turns the downloadable game into Silent Scope where you move a trigger on the screen and shoot enemies. It takes one shot to take down an enemy and you can get a group by targeting a batch of exploding barrels. Again, barrels are your best friend.

The grenade launcher, a new weapon you start with, is also more powerful than a basic gun. Shots arc so grenades fly over obstacles and can land by an enemy soldier’s feet. Blasts from grenade launchers can also break blocks much like the "death from the above" attack. Grenade shots are limited. Not by ammo, but time. There’s a cool down period, just like other active abilities in the game. Bionic Commando Rearmed 2 also introduces passive abilities, like health regeneration, which gradually restores Nathan’s life bar. Once you find the upgrade you can equip it at any upgrade station.

In the first level, I stumbled upon an object I couldn’t shoot, blow up, or destroy from death from above. So, I scanned it using Bio Vision and found out I needed an electric arm to activate it. A Capcom rep explained levels are designed with paths player’s won’t be able to access in their first run. You can revisit levels with other upgrades and open new paths somewhat akin to the Metroid series. 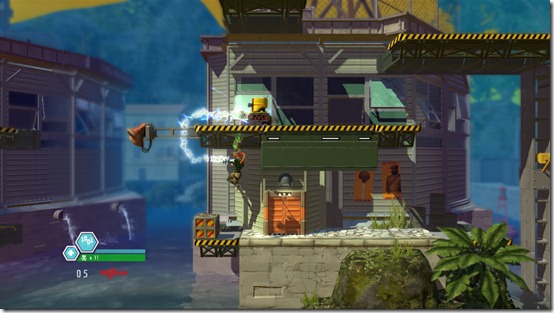 At the end of the level I fought a "jumbo tank" (note the quotes). The robot was invulnerable to bullets and grenades, but not the bionic arm. Pulling the robot’s weak point out with Nathan’s arm was the key to victory.

Player two dropped out when I started the second level, which was an underground mine populated by soldiers and ground skimming robots. Since I was flying solo, I tried to race through the level. Instead of shooting enemies, I jumped and swung past them with the grappling arm. This is when I noticed reaching some areas necessary to complete the stage would be impossible without jumping.

For purists and challenge seekers, Bionic Commando: Rearmed 2 nixes jumping in classic mode. Since I didn’t think it was possible to climb up to an area without a jump, I asked if classic mode levels had a different layout. A Capcom rep confirmed this, explaining levels have an alternative level design with a "path" for players to follow.

Bionic Commando: Rearmed 2 comes out on February 1 for PlayStation Network and a day later on Xbox Live Arcade.