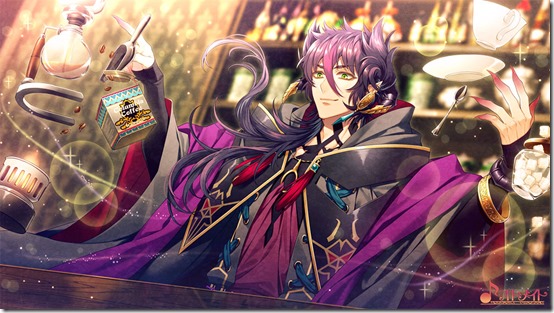 At its Anime Expo 2019 panel, Aksys revealed multiple Nintendo Switch otome game ports and two new ones. Three familiar games will be available on the console. Code: Realize ~Guardian of Rebirth will arrive first in December 2019. It will be accompanied by Code Realize ~Future Blessings~, the first fandisc will come in 2020. In addition, Collar x Malice will come to the Nintendo Switch in 2020. Finally, Collar x Malice Unlimited will arrive in 2020. Finally, the new Nintendo Switch games are Cafe Enchante and Piofiore no Banshou, which will be out in 2020.

Code Realize: ~Guardian of Rebirth~ is about a woman named Cardia with a poisonous touch. She’s been living isolated in a mansion, until Lupin comes in and breaks her out of her “cell.” As you go on an adventure in an alternate London, you can romance Lupin, Helsing, Frankenstein, Impey, and Saint-Germain. In the Future Blessings fandisc, Finis and Herlock Sholmes routes are available.

Collar x Malice follows a policewoman after an X-Day incident who is investigating a terrorist group with some detectives. However, she has to be cautious, as a poisonous collar has been placed around her neck by the group. People can romance Enomoto, Okazaki, Sasazuka, Shiraishi, and Yanagi. Collar x Malice Unlimited is the fandisc that follows the events after X-Day and offers an Adonis side-story.

Cafe Enchante is an otome with a story from the people who made Code: Realize and Collar x Malice. It will come to the Nintendo Switch in Japan on October 10, 2019. Players follow a young woman who has inherited her grandfather’s cafe and its otherworldly patrons. Each one is reportedly a “Demon King.”

Piofiore no Banshou, which has the working title Piofiore in English, is set in 1925 Italy. The Falzone, Lao-Shu, and Visconti families each dominate the town, and the heroine draws the eyes of all three. The bosses and members of the three families start to fall in love with her, and she eventually gets to learn why she is a target.