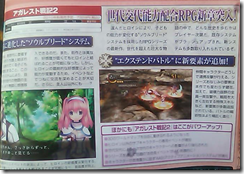 That countdown on Compile Heart’s site? It’s for Record of Agarest 2. Famitsu featured the game in this week’s issue, which probably isn’t surprising since we mentioned it back in March.

Like the other Record of Agarest War games, this title also has a multi-generational story and the soul breeding system for creating the next hero. The article in Famitsu notes an improved battle system. Expect new skills, including a special skill where all of the characters team up.

Compile Heart is also enhancing the game with an improved active animation system (AAS) for facial expressions and more events with the girls. The big twist is events aren’t just with the protagonist. Heroines can also have events with sub-characters.

Record of Agarest War 2 is on track for fall in Japan.