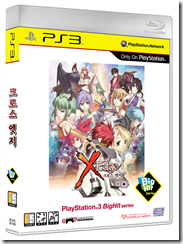 It’s not quiet an entry in the Guinness Book of World Records, but Cross Edge passed a milestone of their own. The crossover RPG sold enough copies in Korea to join the “big hit” budget label, South Korea’s equivalent of Greatest Hits.

Big Hit games are branded with a yellow stripe and sent back to stores with a lower price tag. Cross Edge will be re-issued on May 25 and publisher CyberFront is bundling a limited number of copies with a soundtrack CD.

One reason why Cross Edge may have been successful in Korea is that it’s actually in Korean. Many text heavy games like RPGs, from Japan and the West, are not localized. Cross Edge, games distributed by Nintendo of Korea, and some of the Shin Megami Tensei games are.