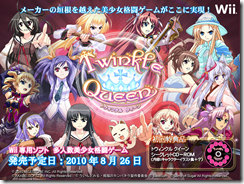 Milestone set August 26 as the date for Twinkle Queen, a 2D fighting game with a bizarre mashup. Twinkle Queen takes girls from four eroge visual novels and throws them into the ring. Three characters from each series are in the game for a total of twelve announced fighters.

Just like Tatsunoko vs. Capcom, each character has light, medium, and strong attacks. Twinkle Queen also has a partner system. You can call change characters as a defensive move or call an ally out for a switch out attack.

Twinkle Queen supports a Classic Controller configuration and you’ll probably want to have one of those handy if you import it. Right now, Twinkle Queen is only slated for Japan.